This article was motivated by a provocative discussion with a thoughtful RIA. Let’s call him Harry.

Harry expressed some disappointment with the performance of Global Tactical Asset Allocation (GTAA) strategies over the past few years relative to some popular tactical U.S. sector rotation funds.

Harry’s definition of GTAA is any strategy that regularly alters its allocation across a wide variety of global equity markets and asset classes, including bonds, REITs, commodities, and cash. In contrast, tactical U.S. sector products attempt to earn active returns by allocating to the most prospective U.S. equity sectors. In addition, many of the sector strategies can hold substantial amounts in cash when few or no sectors are attractive.

Harry’s point, which is fair in many respects, is that the goal of investing in tactical U.S. sector products is the same as the goal of investing in GTAA products – strong risk-adjusted returns with a smooth equity curve and manageable drawdowns. As an investor, he doesn’t care how his wealth is created, only that it has a reasonable upward slope with fairly small wiggles around the upward trend. If U.S. sectors are more likely to do the trick, that’s where he’d like his money to be.

Unfortunately, there is a major flaw in this logic. You see, even awful U.S. sector rotation products would have been expected to beat top tier GTAA strategies over the past few years. To understand why, consider that an active manager’s ability to deliver returns depends on three factors, which vary in importance through time:

Depending on the interplay between these three factors, mediocre managers operating on an especially strong investment universe should quite often be expected to outperform even very skilled managers who are operating on a weaker universe. Worse, the dynamic and unpredictable nature of global markets are such that this situation can persist for much longer than might seem intuitively reasonable. This makes distinguishing manager skill from luck extremely challenging, especially over short horizons like 3 to 5 years.

To truly gain an understanding of the difference between the opportunities presented by two investment universes, it is helpful to invoke the concept of ‘random portfolios’. Random portfolios are created by randomly assigning portfolio weights among eligible assets in a universe at each rebalance date. It is possible to impose constraints on the character of the random portfolios, such as: all weights must be positive; weights must sum to 1; maximum weights in certain assets; minimum, maximum or target number of holdings, etc., in order to model the true opportunity set available to a manager.

In the following analysis, we examine the relative opportunity sets available to GTAA managers vs. U.S. sector managers over time. Our intention is to discover the relative opportunity – in the form of return distributions – available to managers in each universe over rolling annual periods from 1995 – 2015. To do so, we created 10,000 random portfolios each quarter rom a universe of 10 global asset classes, and another 10,000 portfolios from a universe of 10 global sectors. We saved the daily returns for each portfolio over the subsequent quarterly period, and observed the returns from rolling 4 quarter periods to produce annual returns.

Figure 1. provides a snapshot of the annual period ending September 2014, where most random sector portfolios performed substantially better than most random asset class portfolios. Note that, during this period the average Sharpe ratio for sector portfolios was over 2, while the average Sharpe ratio for asset class portfolios was about 0.4. In other words, if both U.S. sector focused managers and global asset allocation managers were monkeys picking portfolios at random, we would expect the average risk-adjusted performance of the sector monkeys to deliver over 4x the performance of the asset class monkeys.

The distributions around these means are also important to our analysis. From visual inspection, you can see that the 5th percentile outcome for sector portfolios (left tail of light blue plot) is about the same as the 95th percentile outcome for asset class portfolios (right tail of dar blue plot) for this period. In other words, even the least skilled sector allocator choosing the best U.S. sectors over this period would be expected to deliver better performance than the most skilled asset allocator choosing the best assets. 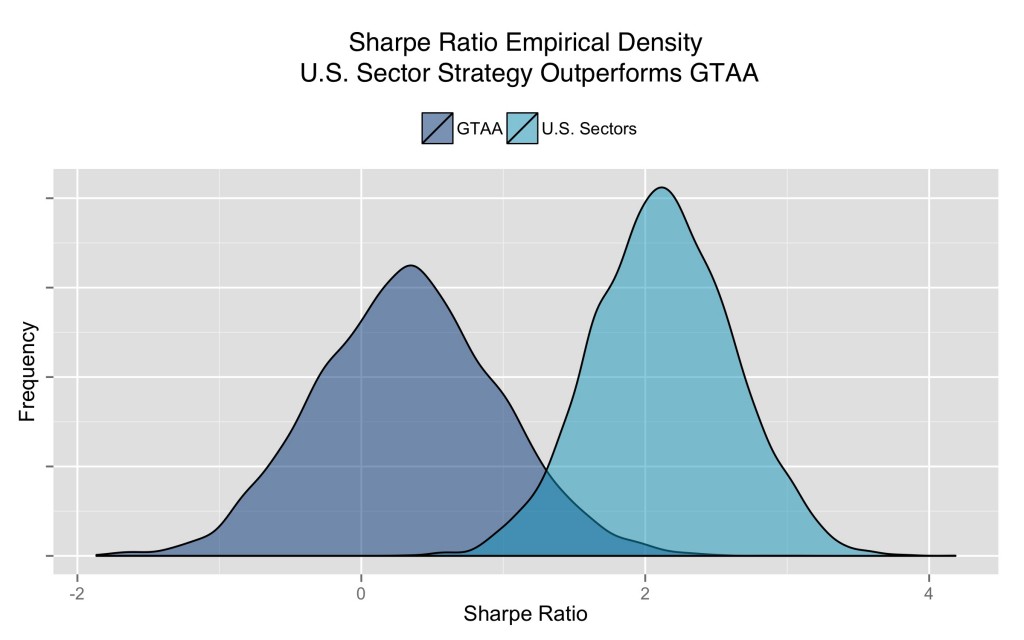 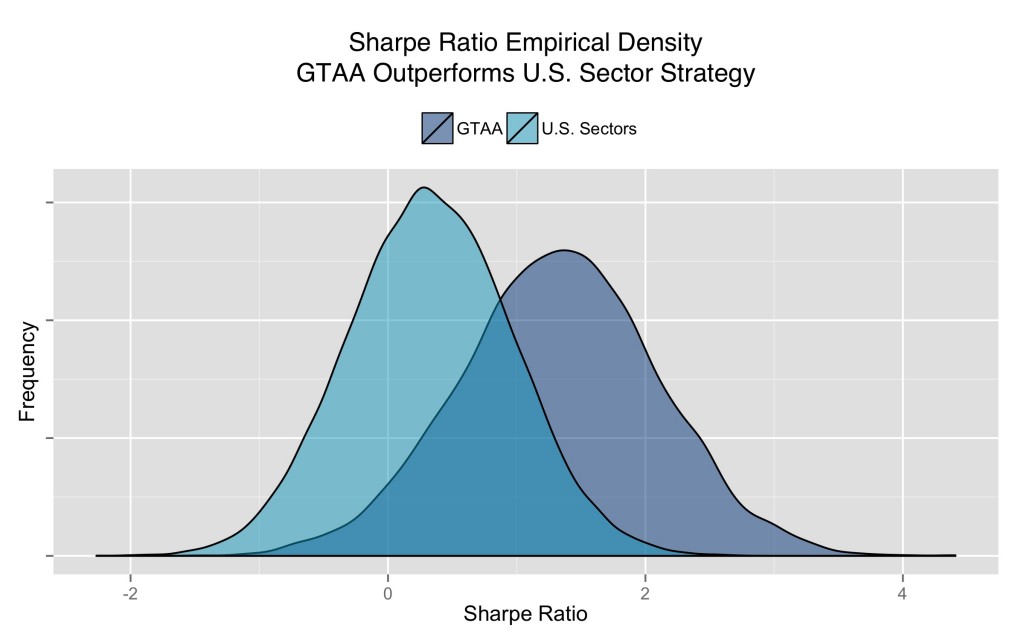 Of course, we don’t expect our asset managers to act like monkeys. Presumably our managers have skill, and will perform better than what might be expected from random guesses. But we are specifically concerned with comparing an asset allocator’s performance with a sector allocator’s performance over a given observation horizon. In which case, we want to know the chance that portfolios selected by a manager in one universe over the past year would outperform portfolios selected by a manager in the other universe over the same period.

In Figure 3. we plot this quantity over time (for those who are curious, this statistic is called Probability of Superiority). Specifically, we plot the probability that a performance outcome drawn from the asset allocation distribution will exceed a performance outcome drawn from the sector distribution over trailing annual periods ending in each quarter from 1995 – 2015.

Another way of looking at the problem is from a direct examination of the relative skill that an asset allocator would have to exhibit in each period to deliver better performance than an average sector allocator. In investment management, skill is measured by Information Coefficient (IC), which is the correlation between ex ante investment bets and optimal ex post outcomes. It is a simple matter to calculate the IC that would be required in each period in order for an asset allocator to outperform a sector allocator because of the Fundamental Law of Active Management:

We have already calculated the performance of asset allocation vs. sector allocation in each period, and we know universe breadth averages

for both strategies, so it is a simple matter to rearrange the terms of this equation to solve for the IC.

Using this equation, we can find the empirical IC over each rolling annual period. However, it is less obvious how to interpret Information Coefficient. Fortunately, it’s easy to translate IC into “win rate”, which is the percentage of time a manager makes a bet in the right direction. Win rate and IC are functionally equivalent for interpretation because

Once we have solved for the IC for each strategy in each period, we can find the excess win rate implied for the asset allocation universe vs. the sector universe. This rate tracks the relative skill that would be required for a manager of an asset allocation strategy to deliver better performance than a manager of a sector strategy in each trailing annual period. Figure 4. plots this value through time.

Figure 4. Win Rate that would be required for a GTAA manager to exceed sector manager performance over trailing 4 quarters. 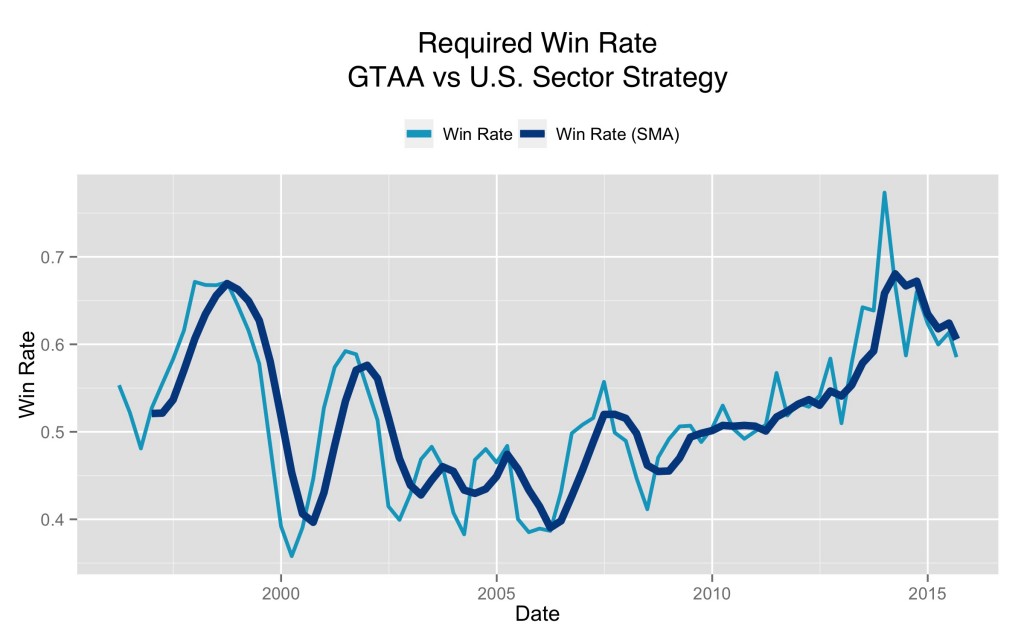 From Figure 4. we see that there are periods when even managers with negative skill at choosing asset classes (win rate < 0.5) will deliver better performance than sector allocators, and vice versa. Over the 4 quarters through Q2 2000, even an asset allocator who’s bets were accurate just 35% of the time would have delivered better performance than an average sector manager. In contrast, over the 4 quarters through Q3 2014, an asset allocator would have had to be accurate with over 78% of his bets to beat an average sector manager.

To put these win rates in perspective, Ding (2010) estimated the ICs for the value and momentum factors in U.S. equities to be 0.017 and 0.025 respectively, which translates to win rates of 50.85% and 51.25% respectively. We also calculated the implied win rates for the Global All Asset value and momentum factors from Asness et. al. (2012) to be 51.3% (they are effectively the same). Given that the strongest observed factors are observed to have average win rates less than 52%, it is effectively impossible for a manager to overcome win rate hurdles of 55%-70%.

So where do things stand at the moment? Over the annual period ending August 31, 2015 it would have been practically impossible for an asset allocator to deliver stronger performance than a U.S. sector manager. In fact, over the past 8 quarters an asset allocator would have required a win rate over 60% in each period to be competitive with U.S. sectors, which is orders of magnitude higher than what we observe from the best long-term factors.

But make no mistake – U.S. equity domination is a transient phenomenon. It is the financial equivalent to the ancient proverb about the tortoise and the hare. At the moment, U.S. stocks have stormed far ahead of the pack. However, U.S. stocks can not continue to outperform all other asset classes without driving an enormous valuation and yield advantage to other markets. Consider the 8 year period from 2001 – 2009, when even poorly executed global asset allocation strategies left U.S. sectors in the dust.

Those investors who default to concentrated U.S. equity portfolios face a day of reckoning. Fortunately, investors have attractive choices for diversification. More passively minded investors might consider the Global Market Portfolio, or a global risk parity strategy. Experienced investors might consider more active approaches that take advantage of factor tilts, such as systematic GTAA strategies. There is no guarantee that global diversification will pay off in the next few weeks or even months. But over the long term, thoughtful global strategies have a much higher probability of delivering against investors’ financial goals. And isn’t that really the point of all this?