At GestaltU we see ourselves as incrementalists. We aren’t so much prone to true quantum leaps in thinking, but we excel at finding novel ways to apply others’ brilliant concepts. In other words, we appreciate the fact that, for the most part, we ‘stand on the shoulders of giants’.

There are of course some true giants in the field of portfolio theory. Aside from timeless luminaries like Markowitz, Black, Sharpe, Thorpe and Litterman,  we perceive thinkers like  Thierry Roncalli, Attilio Meucci, and Yves Choueifetay to be modern giants. We also admire the work of David Varadi for his contributions in the field of heuristic optimization, and his propensity to introduce concepts from fields outside of pure finance and mathematics. Also, Michael Kapler has created a truly emergent phenomenon in finance with his Systematic Investor Toolkit, which has served to open up the previously esoteric field of quantitative finance to a much wider set of practitioners. I (Adam) know I’ve missed many others, for which I deeply apologize and take full responsibility.  I never was very good with names.

In this article, we would like to integrate the cluster concepts we introduced in our article on Robust Risk Parity with some ideas proposed and explored by Varadi and Kapler in the last few months (see here and here). Candidly, as so often happens with the creative process, we stumbled on these ideas in the process of designing a Monte-Carlo based robustness test for our production algorithms, which we intend to explore in greater detail in a future post.

The Curse of Dimensionality

In a recent article series, Varadi and Kapler proposed and validated some novel approaches to the ‘curse of dimensionality’ in correlation/covariance matrices for high dimensional problems with limited data histories. Varadi used the following slide from R. Gutierrez-Osuna to illustrate this concept.

The ‘curse of dimensionality’ sounds complicated but is actually quite simple. Imagine you seek to derive volatility estimates for a universe of 10 assets based on 60 days of historical data. The volatility of each asset is held in a 1 x 10 vector, where each of the 10 elements of the vector holds the volatility for one asset class. From a data density standpoint, we have 600 observations (60 days x 10 assets) contributing to 10 estimates, so our data density is 600/10 = 60 pieces of data per estimate. From a statistical standpoint, this is a meaningful sample size.

For those who are interested in such things, the generalized formula for calculating the number of independent elements of a tensor of rank M with N elements is:

For a rank 2 tensor (such as a covariance matrix) the number of independent elements is:

Therefore, accounting for the diagonal, the covariance matrix generates (10 * 11) / 2 = 55 independent pairwise variance and covariance estimates from the same 600 data points. In this case, each estimate is derived from an average of 600/55 =  10.9 data points per estimate.

Now imagine projecting the same 60 days into a rank 3 tensor (like the 3 dimensional cube in the figure above), like that used to derive the third moment (skewness) of a portfolio of assets. Now we have 10 x 10 x 10 = 1000 elements. The tensor is also symmetrical along each vertex (each corner of the cube is symmetrical), so we can calculate the number of independent elements using the generalized equation above, which reduces to the following expression for rank=3:

You can see how, even with just 10 assets to work with, to generate meaningful estimates for covariance, and especially higher order estimates like co-skewness and co-kurtosis (data density of 600/6500 = 0.09 observations per estimate), the amount of historical data required grows too large to be practical. For example, to achieve the same 60 data points per estimate for our covariance matrix as we have for our volatility vector would require 60*55 / 10 = 330 days of data per asset.

In finance, we are often faced with a tradeoff between informational decay (or availability for testing purposes) and estimation error. On the one hand, we need a large enough data sample to derive statistically meaingful estimates. But on the other hand, price signals from long ago may carry less meaningful information than near term prices signals.

For example, a rule of thumb in statistics is that you need at least 30 data points in a sample to test for statistical significance. For this reason, when simulating methodologies with monthly data, many researchers will use the past 30 months of data to derive their estimates for covariance, volatility, etc. While the sample may be meaningful from a density standpoint (enough data points to be meaningful), it may not be quite as meaningful from an ‘economic’ standpoint, because price movements 2.5 years ago may not materially reflect current relationships.

To overcome this common challenge, researchers have proposed several ways to reduce the dimensionality of higher order estimates. For example, the concept of ‘shrinkage’ is often applied to covariance estimates for large dimensional universes in order to ‘shrink’ the individual estimates in a covariance matrix toward the average of all estimates in the matrix. Ledoit and Wolf pioneered this domain with their whitepaper, Honey I Shrank the Sample Covariance Matrix. Varadi and Kapler explore a variety of these methods, and propose some novel and exciting new methods in their recent article series. Overall, our humble observation from a these analyses and a quick survey of the literature is that while shrinkage methods help overcome some theoretical hurdles involved with time series parameter estimation, empirical results demonstrate mixed practical improvement.

Clustering is a method of dimensionality reduction because it segregates assets into groups with similar qualities based on information in the correlation matrix. As such, an asset universe of several dozens or even hundreds of securities can be reduced to a handful of significant moving parts. I would again direct readers to a thorough exploration of clustering methods by Varadi and Kapler here, and how clustering might be applied to robust risk parity in our previous article, here.

Figure 2 shows the major market clusters for calendar year 2013 and year-to-date 2014 derived using k-means, and where the number of relevant clusters is determined using the percentage of variance method (p>0.90) (find code here from Kapler). 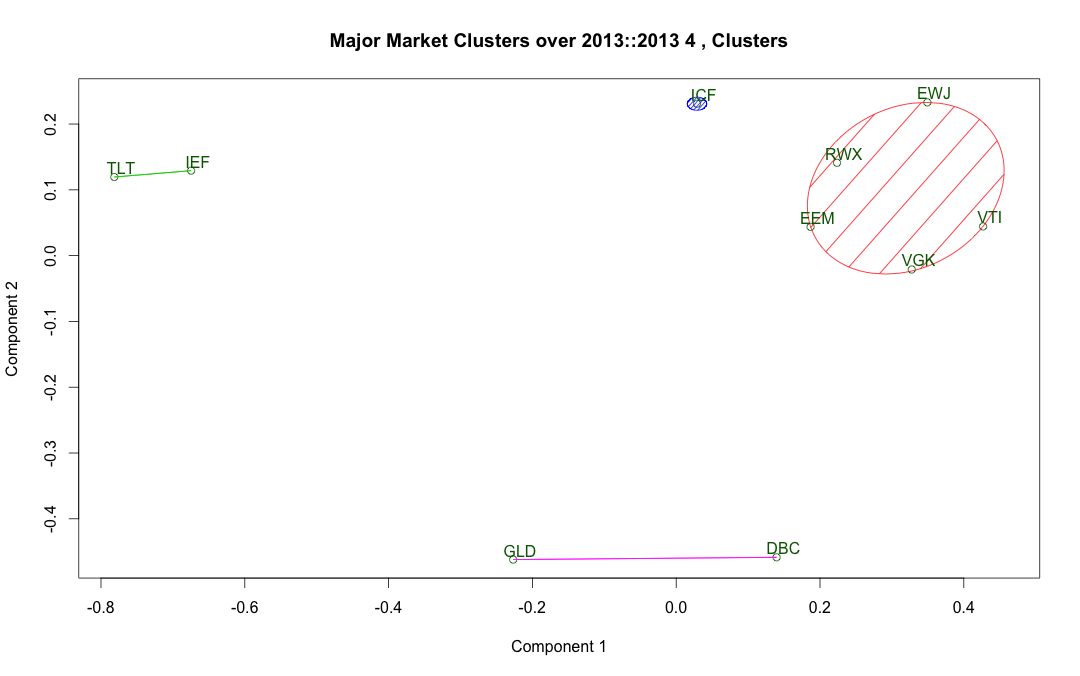 In this universe there appear to have been 4 significant clusters over this period, which we might broadly categorize thusly:

Now that we have the clusters, we can think about each cluster as a new asset which captures a meaningful portion of the information from each of the constituents of the cluster. As such, once we choose a weighting scheme for how the assets are weighted inside each cluster, we can now form a correlation matrix from the 4 cluster ‘assets’, and this matrix will contain a meaningful portion of the information contained in the sample correlation matrix.

We have coded up the logic for this method in R for use in Kapler’s Systematic Investor Toolback backtesting environment. The following tables offer a comparison of results on two universes. We ran minimum risk or equal risk contribution weighting methods with and without the application of our cluster shrinkage method, using a 250 day lookback window. All portfolios were rebalanced quarterly.

Results with cluster shrinkage show a .CS to the right of the weighting algorithm at the top of each performance table. 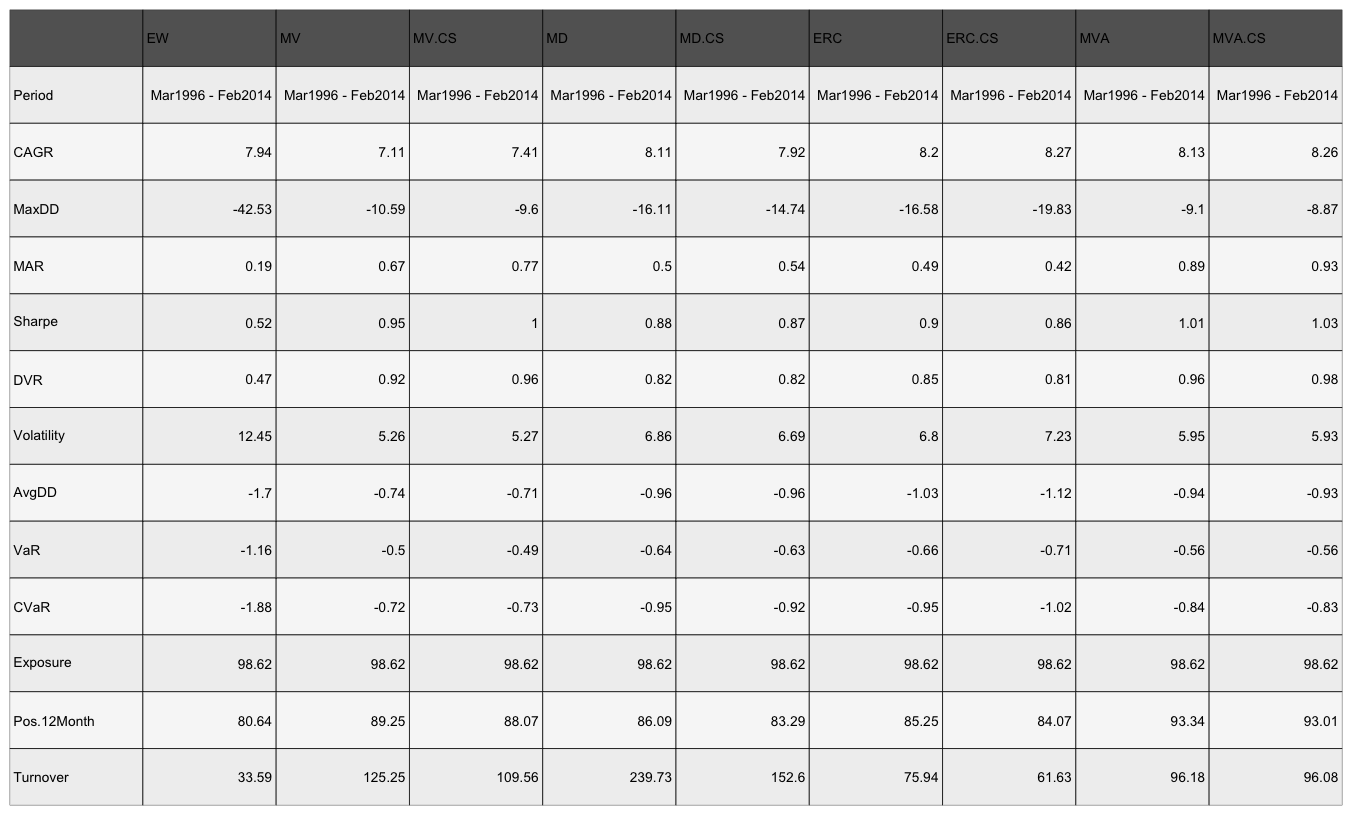 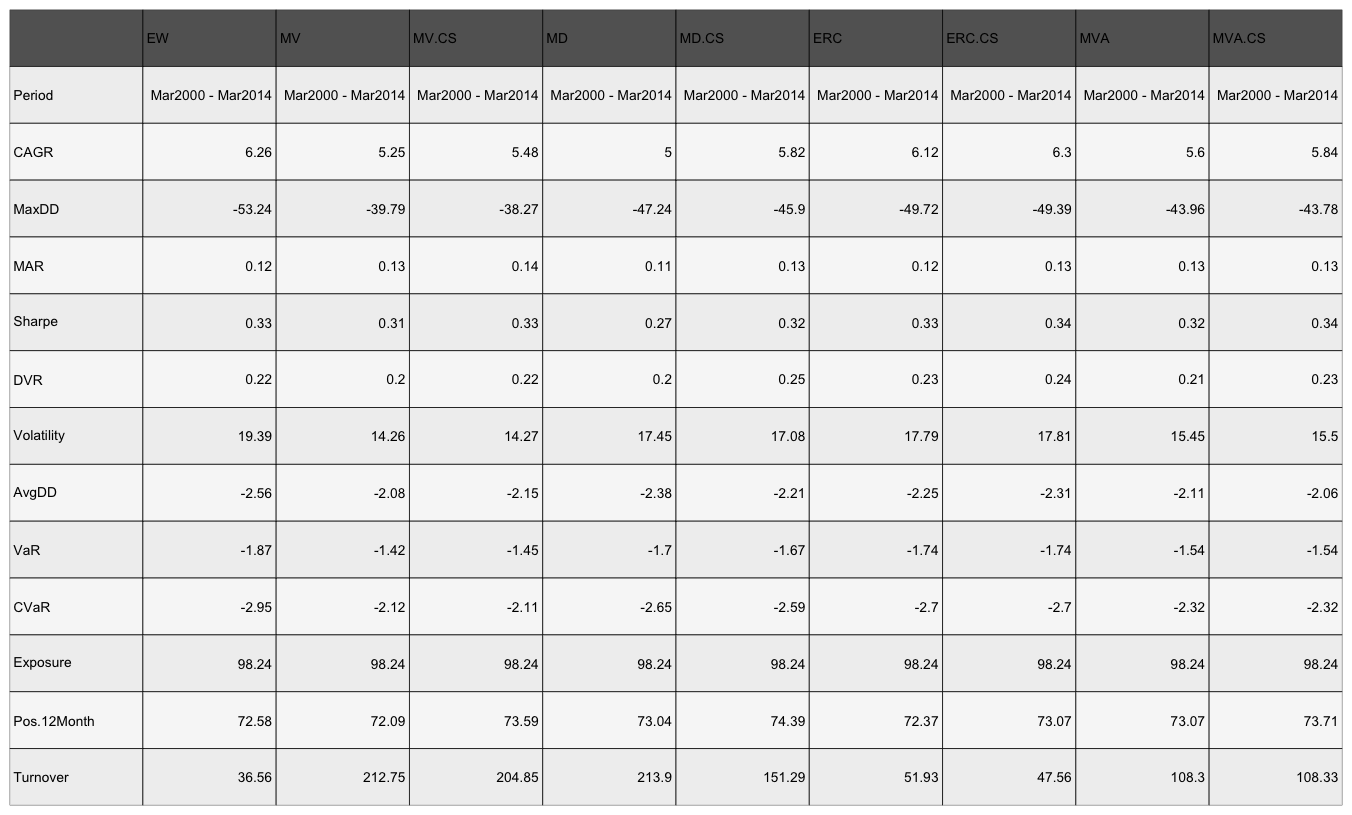 We can make some broad conclusions from these performance tables. At very least we have achieved golden rule number 1: first, do no harm. Most of the CS methods at least match the raw sample versions in terms of Sharpe ratio and MAR, and with comparable returns.

In fact, we might suggest that cluster shrinkage delivers meaningful improvement relative to the unadjusted versions, producing a noticeably higher Sharpe ratio for minimum variance, maximum diversification, and heuristic MVA algorithms for both universes, and for ERC as well with the sector universe. Further, we observe a material reduction in turnover as a result of the added stability of the shrinkage overlay, especially for the maximum diversification based simulations, where turnover was lower by 30-35% for both universes.

Cluster shrinkage appears to deliver a more consistent improvement for the sector universe than the asset class universe. This may be due to the fact that sector correlations are less stable than asset class correlations, and thus benefit from the added stability. If so, we should see even greater improvement on larger and noisier datasets such as individual stocks. We look forward to investigating this in the near future.