Faber’s Ivy Portfolio: As Simple as Possible, But No Simpler

Faber’s Ivy Portfolio: As Simple as Possible, But No Simpler

We’ve been discussing sources of performance decay, degrees of freedom, and the implied statistical significance of systematic trading strategies, so I was pleased when some recent articles triggered an idea for a related case study.

Albert Einstein is oft credited with suggesting that problems should be made ‘as simple as possible, but not simpler’. In fact, a poster with this very phrase and a picture of Einstein’s unmistakable visage adorned the inside of my bedroom door for much of my adolescence. However, readers might be interested to learn that this particular phrase has never been directly attributed to Einstein in any of his published works. Rather, it’s surmised that this statement is actually a distilled version of a slightly less accessible quotation from a lecture entitled, “On the Method of Theoretical Physics” delivered at Oxford in 1933. The actual quote from Einstein was, “It can scarcely be denied that the supreme goal of all theory is to make the irreducible basic elements as simple and as few as possible without having to surrender the adequate representation of a single datum of experience.”

In any event, the distillation is a useful heuristic, and nowhere more so than in the field of empirical finance. To wit, it is attractive to think that an already simple approach, such as Mebane Faber’s ‘Ivy Portfolio,’ a 5-asset, 10-month moving average methodology, which requires monthly attention as originally proposed, might be equally effective with annual rebalancing. For those who aren’t already acquainted with it, Faber’s Ivy Portfolio approach was first proposed in a paper entitled “A Quantitative Approach to Tactical Asset Allocation” in 2007. It has been updated several times since including a recent update in early 2013 which extended the results through 2012. I’m not ashamed to admit that this paper was a primary catalyst for our own interest in quantitative approaches to asset allocation.

The mechanics of Faber’s approach is quite simple. First, compose a diversified portfolio from each of the major asset classes held in equal weight: bonds, U.S. stocks, international stocks, real estate, and commodities. Next compute a moving average (MA) of closing prices over the prior 10 months for each asset. Observe the portfolio at the end of each month, and where an asset closes out the month below the level of its moving average, sell the asset and hold cash, repurchasing only when it closes back above its moving average at the end of any subsequent month.

Our analysis will attempt to answer several questions:

Before diving into our quantitative analysis, please recall that the cornerstone of robust system development is statistical significance. Furthermore, statistical significance is largely a function of the number of observations. It’s difficult to achieve statistical significance with only a few trades, as each trade constitutes one observation. As a result, an annually traded approach starts out with a large hurdle to overcome, which is that we are only able to generate one observation per year per instrument. For example, using just the original Ivy Portfolio’s 5 asset classes – US stocks, EAFE stocks, US real estate, US Treasuries and commodities, if we have 40 years of data we will have about 40*5 = 200 observations.

Granted, 40 years of time series data is meaningful because it covers several secular market regimes, such as the 1970s stagflation, the 2000 tech bubble, the emerging  market and commodity boom of the mid ‘naughts, and the Global Financial Crisis of 2008. Even so, 200 total observations is not enough to generate meaningful statistical confidence, as we will demonstrate below.

To answer the questions we raised above, we ran several tests. Before we explain the tests however, note that we altered the original Ivy 5 concept in some subtle ways:

We approached our analysis from three directions. First, we ran tests using a 252 day (~12 month) moving average rule with annual rebalancing, but where the annual rebalance occurs in months other than December.  We also compared each of the annually rebalanced systems to results from a system that is rebalanced at the end of every month, and another system that is observed for rebalancing every day. Next we performed the same analyses, but using a 200 day (~10 month) moving average filter instead of a 252 day MA filter.

The red bars in the charts show the average results for annually rebalanced models across all of the months in the calendar year. The green bar shows the results of the traditional monthly rebalanced system, and the orange bar demonstrates the performance of a system that is rebalanced daily. For those who aren’t familiar with MAR, it is simply the return divided by the maximum drawdown. 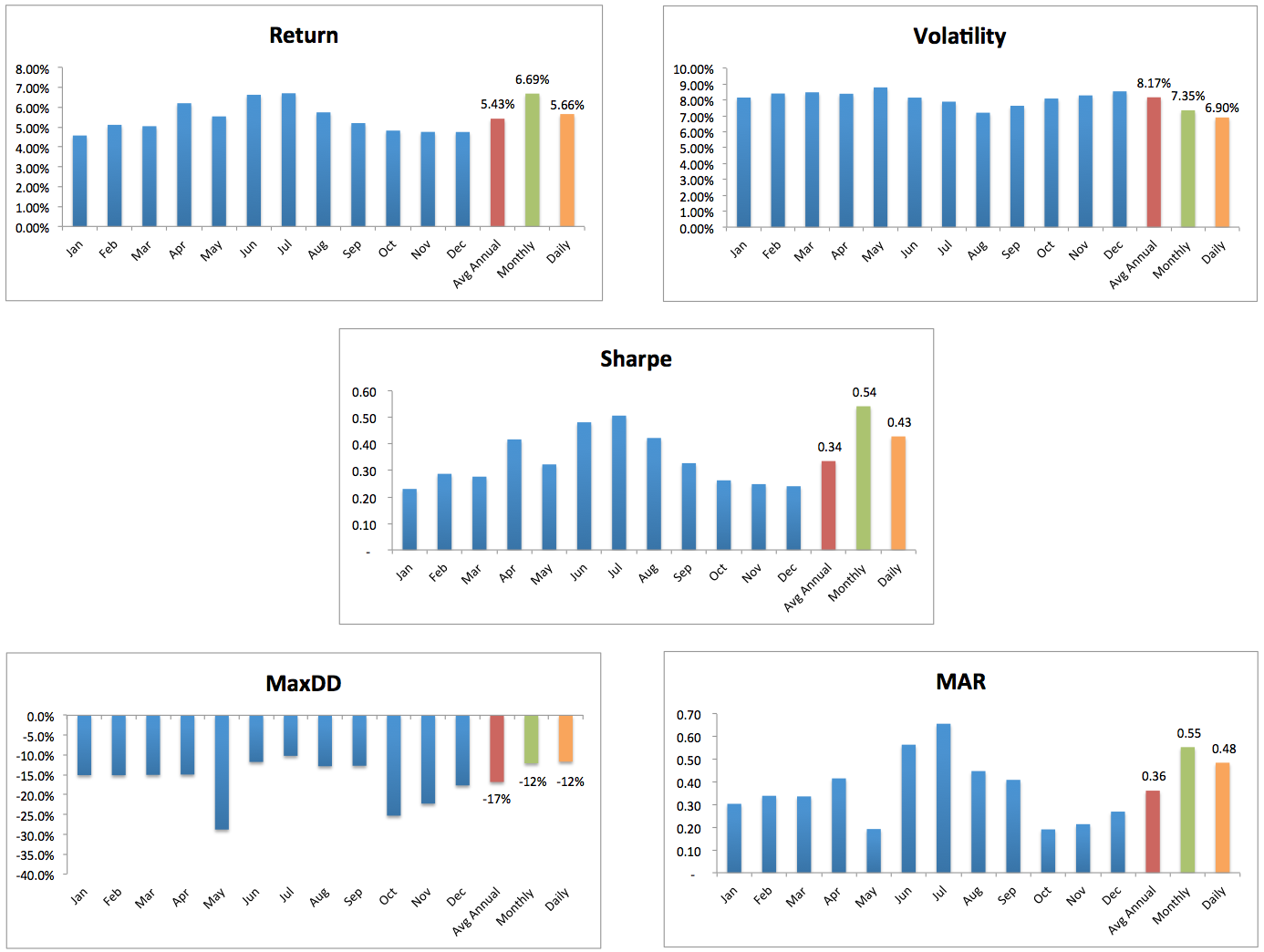 First, note that the 252 day (~12 month) and 200 day (~10 month) versions deliver statistically indistinguishable results on all relevant metrics. So we can safely assert that the 12 month MA used in the original report is relatively robust. However, the validations end there.

Recall that there were really just 2 bear markets over the test horizon: the 2000 bursting of the technology bubble, and the 2008 Global Financial Crisis. Further, only the 2008 Global Financial Crisis really qualifies as a true multi-asset class crash. It just so happens that in 2008 most assets, with the exception of U.S. stocks and real estate, delivered strong returns until June. Further, the crash didn’t really get going in earnest until September. The favourable ‘mid summer’ strategies rebalanced in June, July or August also avoided the whipsaws and volatile bottoming process that occurred in the first three months of 2009. Annual strategies that rebalanced in June, July or August were able to capture all of the returns in 2008, avoid almost all of the ensuing crash, avoid the January whipsaw and V bottom in March, and harness a substantial portion of the 2009 rebound. Lucky stuff, not likely to be repeated in the same way next time.

For fun, we took the next natural step for this analysis by examining the performance of annually rebalanced systems traded on each day of the calendar year. There are typically 252 trading days in a calendar year, so we examined the results for systems that trade annually on day 1, day 2, day 3…day 251, day 252. Trade day 1 will have a slightly different calendar date each year, depending on where New Years Day falls in the week, but in all we have 252 different annually rebalanced systems from which to compare results.  Figures 3. and 4. show these results separately for 252 day MA and a 200 MA systems. Rather than show the results for each annual trade day (which would have made for a very wide chart), we sorted results into quantiles; this better illustrates the distribution of performance for all of the individual systems.

The numbers at the bottom of each chart represent percentile values. For example, the bar above 0.1 in any chart describes the 10th percentile observation; that is, the observation that is exceeded by 90% of all observations. Among 250 observations, this would be the 25th lowest value. The 0.5 bar is highlighted in red because it represents the median value, or the 50th percentile. 50% of all results exceed this value, and 50% are below. 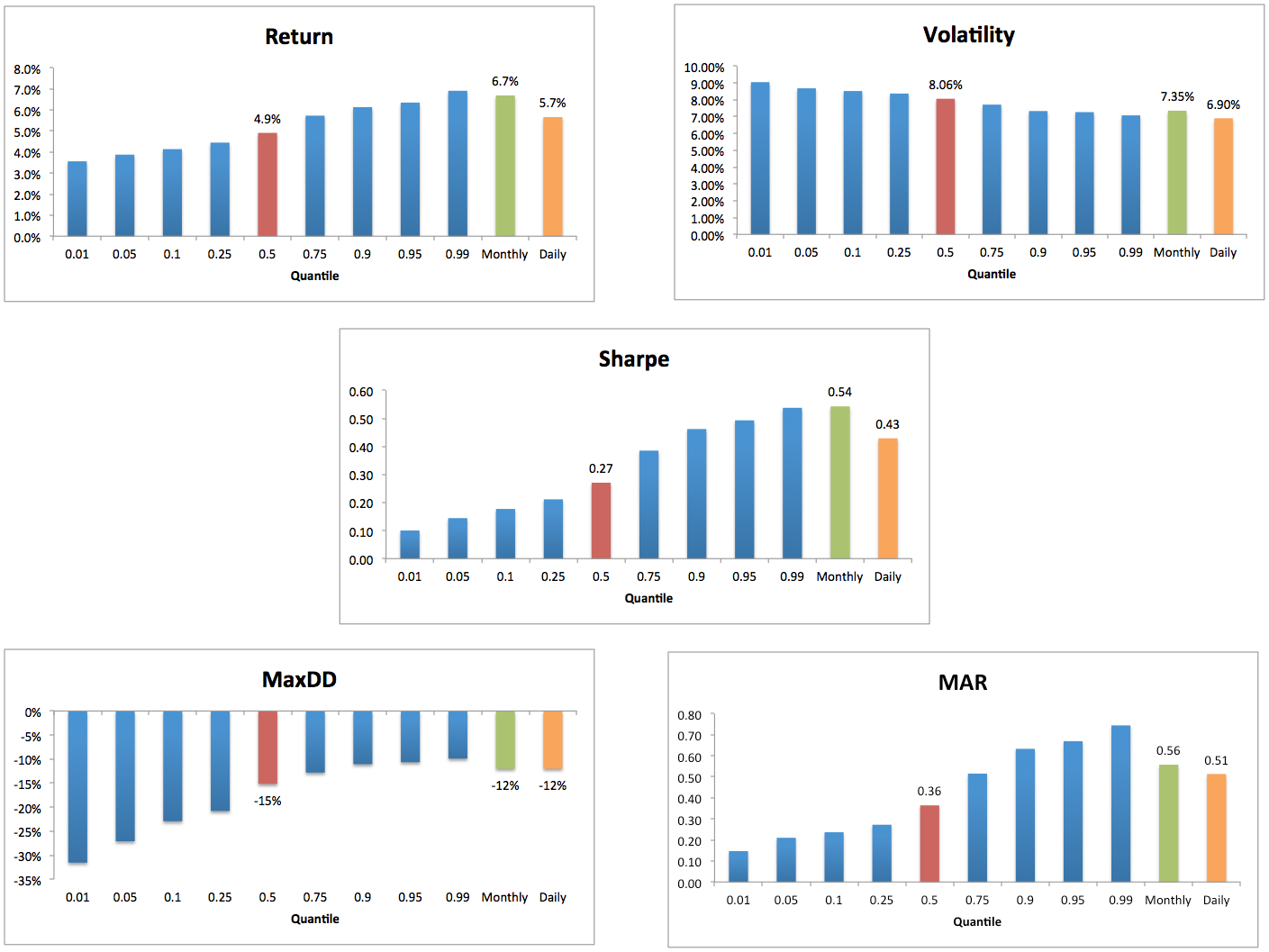 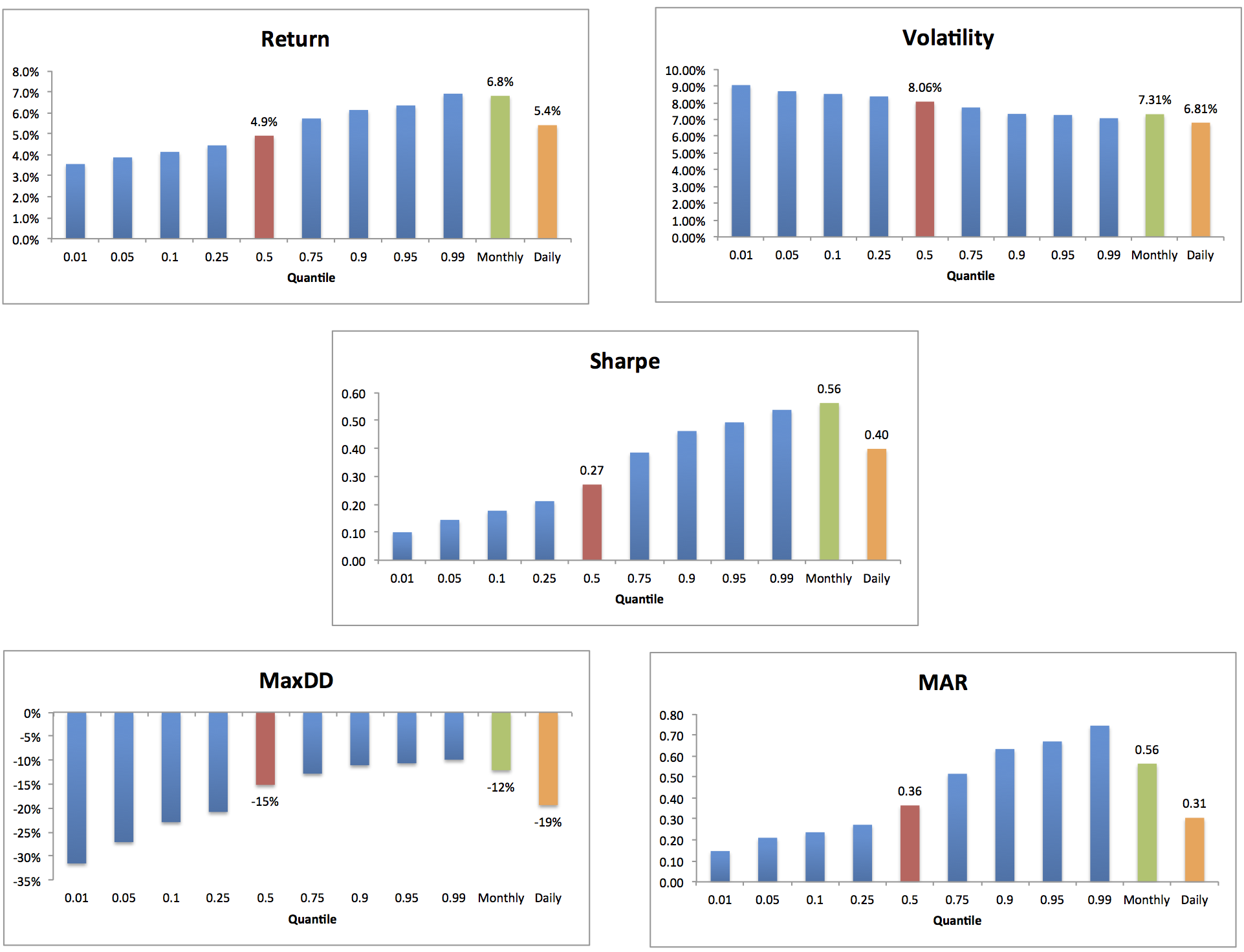 Some readers may have been wondering whether there was anything magical about the fact that the monthly traded approach always executes on the last trading day of the month. Would results vary if we traded monthly, but on the 8th day of the month, or perhaps day 17? To satisfy your curiosity, we ran the monthly traded system with trading days from day 1 to day 20 in each month to see if this made a large difference to results. Figure 5 summarizes the output.

Figure 5. Performance results for monthly systems rebalanced at each trading day of the month, 10 month MA 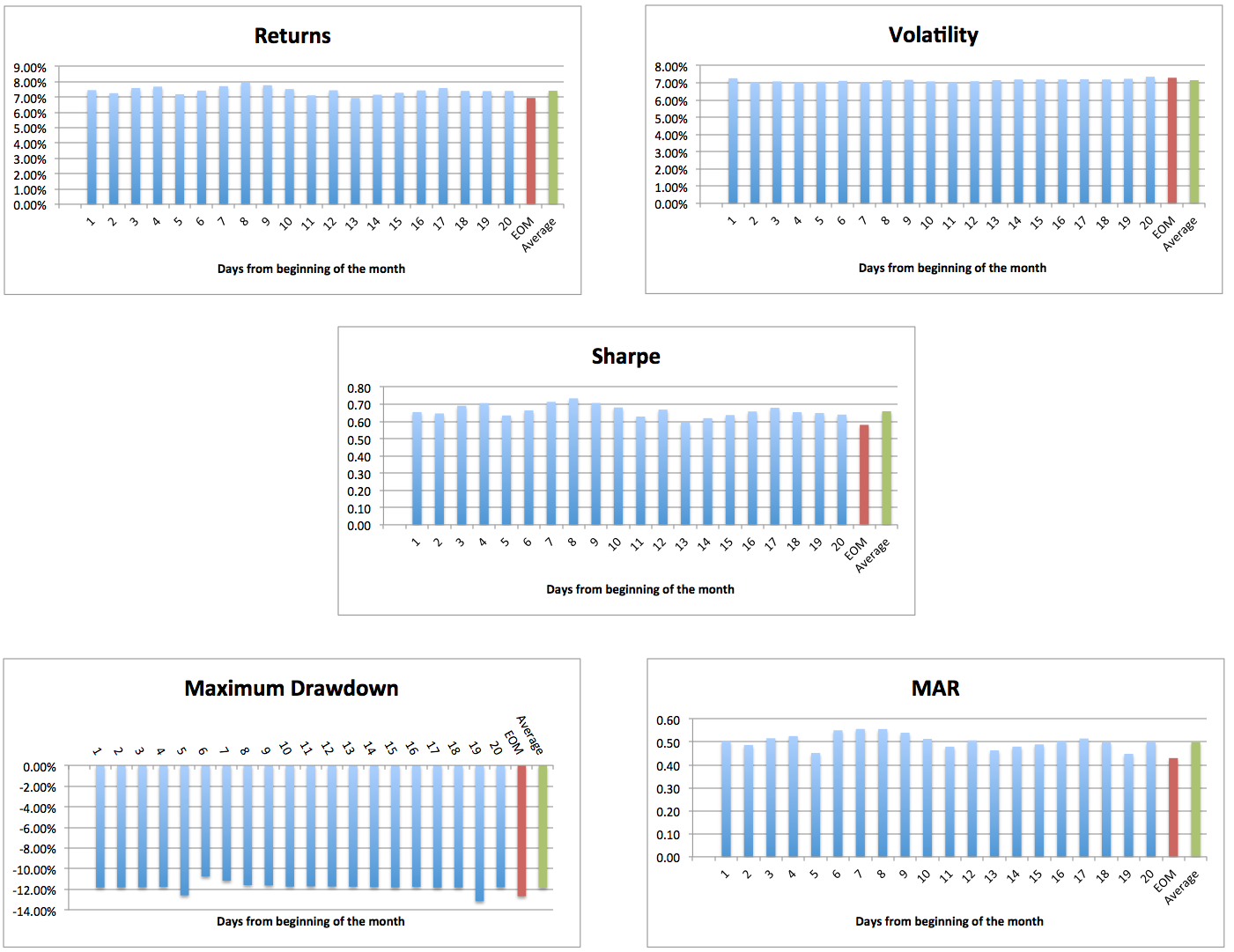 Some of you may be surprised to learn that rebalancing on the last day of the month carries no advantage, and may in fact be disadvantageous. Keen systematicians may choose to divide their capital and trade each fraction on a different day of the month to further stabilize results without impacting turnover (though smaller investors may incur more trading costs).

The goal of this article was not to conclude whether annual, monthly, or daily rebalancing is optimal for Faber’s ‘Ivy-5’ portfolio. Indeed, quite the opposite. Rather, the goal was to provide a framework for judging the statistical robustness of a simple systematic asset allocation strategy. In doing so, it’s important to test how sensitive a strategy is to small changes in important features of the system. In this case, while our tests were very consistent with the spirit of the original analysis of the Ivy 5 method, small changes to the asset universe, moving average window, and in particular trade dates resulted in material dispersion in results. For example, the 5th percentile worst outcome for all annually rebalanced approaches, per Figure 3., was a compound return under 4%, a Sharpe ratio under 0.15, and a maximum drawdown of over 25%. In contrast, the 95th percentile outcome was a compound return over 6%, a Sharpe over 0.5 and a maximum drawdown under 10%. Pretty significant.

It also became clear through our analysis that an annually rebalanced approach to an Ivy 5 type methodology is very unlikely to generate the same absolute or risk-adjusted performance as the monthly rebalanced approach, even after accounting for fairly onerous transaction cost assumptions. On the other hand, more frequent daily rebalancing incurs transaction costs that swamp any potential benefits and may be vulnerable to more frequent whipsaws which have the potential to amplify drawdowns.

As simple as possible, but no simpler!

Toward a Simpler Palate