We don’t write very often on macroeconomic policy anymore, mostly because we are acutely aware of the complexity of economic systems. But it’s also because we are deeply upset at how we’ve permitted our policymakers to act over the past few years. While the Krugmans of the world loudly advocate mortgaging our childrens’ futures to preserve a bloated, over-indebted, short-termist, consumption focused status quo that channels virtually all of society’s wealth creation into the hands of the privileged few, we can’t help but think this will all end very badly. Worse, those who stand to lose the most – our children – are the least to blame for this predicament.

But I digress. This article is actually about how central banks have orchestrated a large overshoot in asset prices, and what this means for likely future returns to stocks and bonds in particular. We’ve written on this topic before, but this article approaches the problem from the point of view of central bank policy rather than analyzing valuation metrics.

The motivation for this article comes from a Bank of England “Quarterly Bulletin” entitled, “The United Kingdom’s quantitative easing policy: design, operation and impact“. We feel this bulletin has profound implications for investors, as it speaks to central banks’ goal of stimulating demand and inflation expectations primarily through the channel of ‘portfolio balance effects’: that is, inflating prices of stocks and bonds.

Specifically, the BOE believes that the primary impact of QE in the short term is to cause holders of QE eligible securities – primarily non-bank financial institutions such as insurance companies and pensions – to surrender these securities to central banks in exchange for newly printed money. The BOE then expects this cash to be redeployed toward higher yielding securities, such as credit and equities. This dynamic, compounded by effects from policy signalling (central bank jaw-boning) and liquidity enhancements, would  serve to drive the real prices of these assets materially higher in the short term. The ultimate goal is to engender a ‘wealth effect’ whereby asset holders feel more confident and ratchet up spending commensurately, increasing end demand and inflation.

The “Impact Phase” of quantitative easing,  as described in the above paragraphs, is illustrated in Figure 2 below. The red line shows the effect on real asset prices like stocks and credit markets, while the blue line shows the increase in the broad money supply as a function of QE. Note how asset prices track excess broad money creation, but with a meaningful amount of excess torque. Clearly we have seen this asset pricing dynamic play out around the world wherever central banks are aggressively pursuing quantitative easing, and the effect is most profound in regions with the most aggressive monetary policies, such as the U.S. and Japan.

You may be thinking, ‘So far, so good. What’s the problem?” Here is where things get interesting. Again directly from the paper:

The language in the paper is predictably benign, so as not to alarm readers about the implications. But the benign language is misleading, especially with respect to the impact of attenuating QE on real asset prices like stocks, bonds and real estate. Essentially, portfolio balance effects are driven by the flow of newly printed money which is used to purchase government bonds primarily from insurance companies, wealth funds and pensions. While bond purchases – QE – continues to take place,  these institutions are continually faced with holding newly minted low-yielding cash assets, which they then roll out the risk curve in search for higher yields. As assets are priced ‘at the margin’, these marginal dollars serve to continually apply upward pressure to prices. No doubt this engenders other feedback mechanisms related to (over)confidence, leverage effects, and momentum which carries markets far beyond equilibrium. However, when this positive feedback mechanism ends, “real asset prices begin to fall back“. Let’s see what that looks like according to the Bank of England in Figure 3.

Figure 3. The ‘Adjustment Phase’ after the end of Quantitative Easing 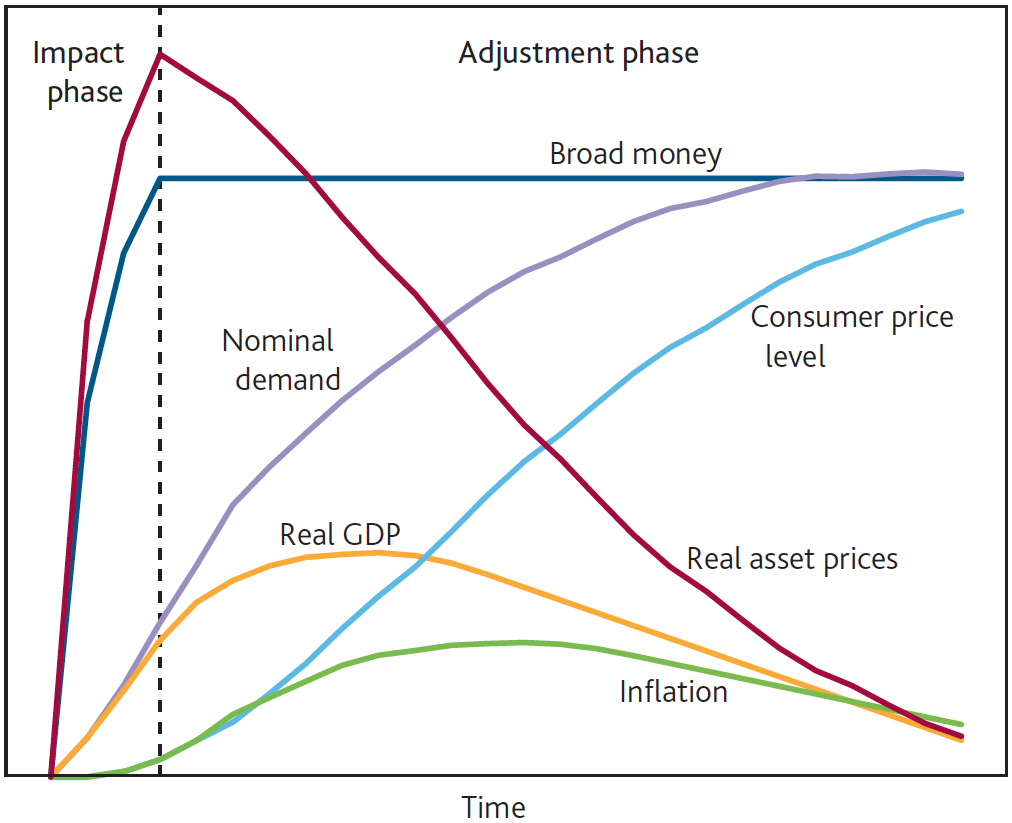 It’s clear from Figure 3. that the Bank of England believes the mechanism of action for QE to result in massive short-term asset price inflation during the ‘Impact Phase’ of Quantitative Easing. However, when asset purchases slow or stop during the ‘Adjustment Phase’, they fully anticipate real asset prices to revert to prior equilibrium valuations. If we apply this concept to equity markets, we would expect markets to revert to long-term average valuations which, depending on the valuation method implies a real price drop of between 50% and 80%, per Figure 4. below.

Further, markets rarely just revert to ‘equilibrium’; just as markets clearly overshoot to the upside from leverage effects, herding and other feedback mechanisms, they are equally likely to overshoot to the downside. Indeed, in order to preserve a stable equilibrium, market must definitionally trace out the same magnitude of time and value below equilibrium as they do above it.

It’s also worth noting that central banks have a very poor track record of managing this ‘Adjustment Phase’ effectively, as we have seen repeatedly in Japan over the past two decades or more, and as we saw in the U.S. and Europe in 1937 when policymakers unwound stimulative policies after the Great Depression. Figure 5., which we captured from a recent Bridgewater presentation illustrates how monetary tightening periods have negatively impacted asset prices at various periods in the past. 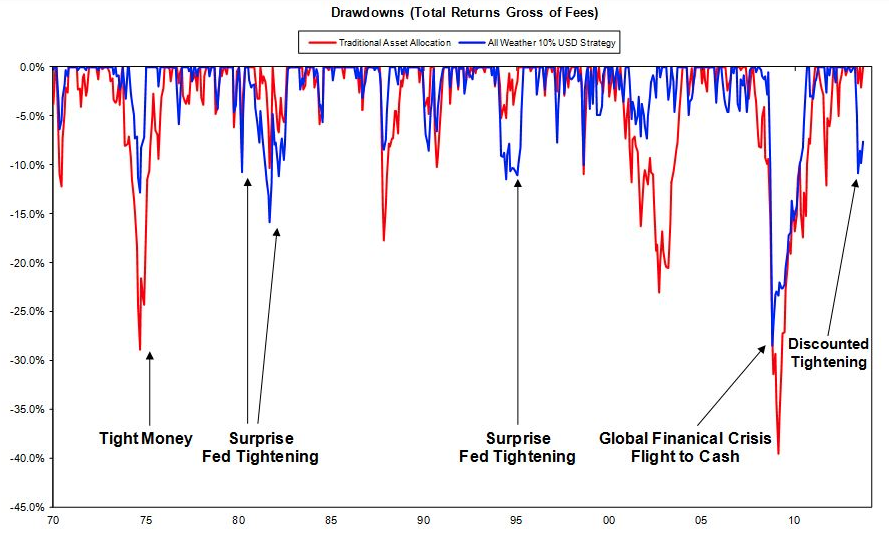 Speaking of Bridgewater, Ray Dalio was on TV yesterday claiming that investors should expect a nominal 4% in total returns from equity markets over the next 10 years. That’s a little bit more ‘balanced’ than our own statistical forecast of about 0% real, or 2.5-3% nominal returns over the same period, but definitely in the same ballpark.  Figure 6. from the same presentation as Figure 5. shows how Bridgewater may have constructed its forecast. Returns since 1970 on a traditional 60/40 endowment style portfolio have averaged about 9.9%. This return can be decomposed into the return on cash plus the excess return on risky assets in the asset allocation. Note that over the full period cash returned 5.6% nominal while the risk premium on the asset allocation amounted to just 4.3%.

If we fast-forward to today, we note that current cash yields (for 5 year money) are 1.4%, about 4% lower than the average yield over the past 43 years. The question is, what should we assume in terms of excess returns on a traditional asset allocation in order to arrive at our total return estimate? I guess Bridgewater expects about 3%…

To reiterate what we’ve said many times in the past, while long term performance – 7 to 20 years – may look pretty bleak, anything could happen in the short term. All our research suggests markets are nearly impossible to forecast in the intermediate term (several months to 5 years or so), and markets have a history of moving well beyond equilibrium once momentum takes hold, but over the long-term we expect gravity to exert its inexorable pull. Looks like the BOE agrees.

One Factor to Rule Them All