James Montier, one of our favourite thinkers and fellow evangelist for behavioural economics and evidence based investing, published a great report last year entitled, “I Want to Break Free, or, Strategic Asset Allocation ≠ Static Asset Allocation“. The piece is a tour de force against the ubiquitous concept of “Strategic Asset Allocation” (SAA) which argues that investors should set an asset allocation at the start of their investment horizon that theoretically balances individual risk tolerance against long-term average market risks, and then regularly rebalance back to this target allocation.

As we have argued many times in this blog, traditional SAA is hamstrung because there is no mechanism to alter the asset allocation given changes in relative expected returns and risks from each asset class over time. Inconceivably, adherents to this approach would have advocated exactly the same mix of stocks and bonds in December 1999, when stocks were as overvalued as they had ever been in history, as they would have advocated in 1982 when stocks were dirt cheap. We have argued, and Montier apparently concurs, that investors should be constantly aware of whether prospective returns to stocks are high or low, and alter asset allocations accordingly through time.

Montier is a die-hard value investor, so he views prospective returns through this lens. He asserts that investors should only invest in markets when they offer the prospect of reasonable future real returns on the basis of reasonable valuations, and they should avoid markets when they offer low returns. While this seems eminently reasonable, in practice this logic can be very difficult for investors to adhere to because markets can continue to get more and more expensive (or cheaper) for many years, and investors often find it difficult to stand on the sidelines and watch the market shoot into the stratosphere. For example, markets entered a period of extreme valuation by many measures in 1994 and continued to push higher for 6 more years before finally succumbing to valuation levels that were, by some measures, more than twice as high as any other period in history.

For this reason, most wealth managers, institutions, and advisors practice Strategic Asset Allocation, which keeps investors fully invested in their target mix of stocks and bonds at all times. Where active bets are taken in pursuit of better performance, they take the form of relative value approaches where individual securities are selected for portfolios because they have lower valuations than their peers. This approach is starkly different than the absolute value approach described in the previous paragraph because with the absolute value approach, an investor will hold cash when no investments offer strong absolute returns, whereas relative value investors will always be fully invested, even when all investments are expensive and offer low returns.

We thought it would be fun to test an absolute value approach per Montier’s prescription using our favorite long-term stock-market data source, Shiller’s database. The following charts illustrate how an absolute return investor might have fared had he chosen to move out of stocks and into cash where the real absolute valuation of the stock market ended the prior month below a certain threshold. For ease, we chose the cyclically adjusted earnings yield as the valuation metric, which is just the reciprocal of the Shiller PE. We then adjusted the yield value for the realized year-over-year inflation rate to find the real earnings yield. Finally, we used an ‘expanding window’ approach to find the percentile rank of the real earnings yield to eliminate as much lookahead bias as possible. 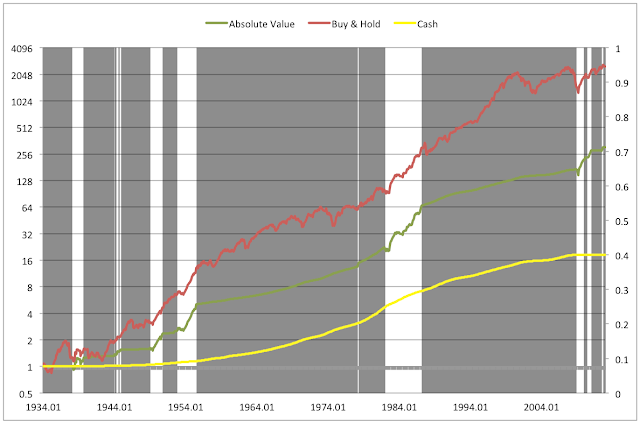 Using the expanding window approach, an investor would have spent about 80% of months in cash over the past 80 years or so, implying a fairly consistent expansion in PE ratios over time (we identify periods where market valuations are above our threshold with grey areas on the chart). Even so, by investing in markets only when they are truly cheap (> median real earnings yield) and holding cash otherwise, investors would have generated about 70% of the total return to stocks with less than half the volatility and 73% lower drawdowns since 1934. The reduction in drawdowns is especially important in the context of Montier’s definition of risk: the permanent impairment of capital.

We know from history however that when markets move from being inexpensive up through fair value, they usually move well into the range of ‘overvalued’ before peaking. If that’s the case, investors might choose to hold onto stocks until they move further into the expensive range. Chart 2. shows the performance of a strategy that holds stocks unless they are in the top quintile of valuations (bottom quintile of real earnings yields), and holds cash otherwise. 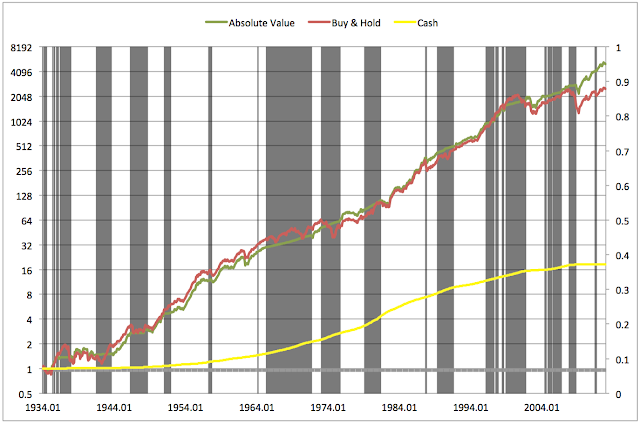 By tolerating higher, but not extreme, valuations investors would have achieved higher returns than the markets overall (11.4% vs. 10.4%) with 26% less volatility and 40% lower drawdowns. As a result, the Sharpe ratio of this approach was 0.8 vs. 0.51 for buy & hold.

A more coherent approach to this framework might eliminate the absolute threshold entirely in favour of a scaled approach. For example, an investor might hold stocks in proportion to the percentile rank of the real earnings yield, and hold the balance in cash. For example when the real earnings yield is at the 80th percentile, the investor would hold 80% stocks and the balance of 20% in cash. Conversely, when stock earnings yields are at the 20th percentile, he would own 20% stocks and 80% cash. Again, this measure is based on valuations at the prior month’s close, and using an expanding window to avoid lookahead bias. Chart 3. shows the results of this approach.

Chart 3. Valuation based asset allocation: own S&P500 in proportion to the percentile value of real earnings yield (hold balance in cash) 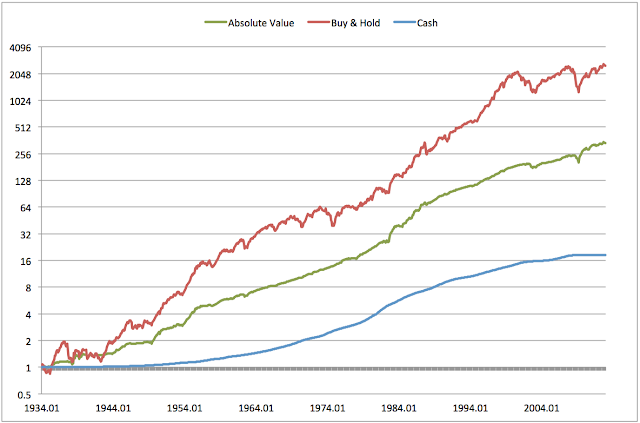 This coherent approach avoids having to choose a cutoff threshold, which makes it more robust. Further, the Sharpe ratio is almost as high as for the model with an 80th percentile threshold, though in this case it is because of very low average volatility (5.1% vs. 9.6%), as the returns are considerably lower.

Lastly, we wondered how the same approach would have worked if instead of allocating to cash, we allocated to Treasuries. Chart 4. gives us the answer.

Chart 4. Valuation based asset allocation: own S&P500 in proportion to percentile value of real earnings yield (hold balance in Treasuries). 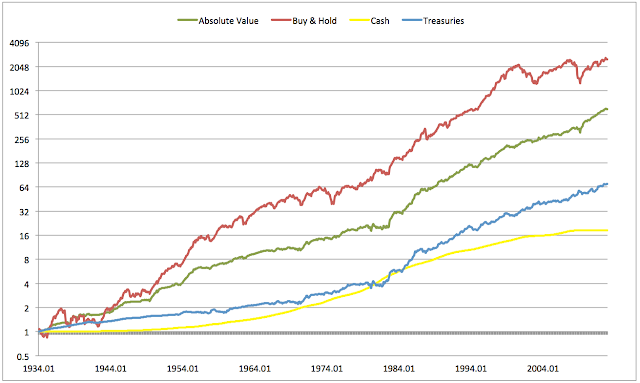 In keeping with Montier’s absolute value philosophy, we investigated several dynamic allocation strategies based on reducing or eliminating exposure to markets as they get more or less expensive, using the real earnings yield as our yardstick. In every case we tested the absolute value based approach delivered a higher Sharpe ratio, and a much higher ratio of returns to our approximation of Montier’s measure of risk – maximum drawdowns.

The primary challenge with these approaches is that they require adherents to exit markets just as the party gets going into major peaks. Major market peaks manifest in the midst of extreme optimism and enthusiasm about the future which sweeps every last investor dollar into stocks over several euphoric years. It takes extreme fortitude to stand aside in cash during these long periods of parabolic market gains, and we know from the published studies in behavioural finance that most investors will buckle and go all-in just before the market peaks and rolls over.

Investment managers that adhere to this type of approach will suffer enormous career risks during these periods, and lose a large portion of their assets under management. Montier’s current firm, GMO, admits to losing over 40% (!!) of total client assets in the several years leading up to the 2000 market peak, and John Hussman has experienced similar investor attrition over the last few years as his valuation models have kept him largely on the sidelines during the market’s current bull market run. To paraphrase Keynes ‘The markets can stay irrational longer than you can keep clients.’ 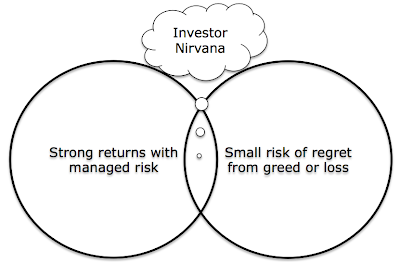 Don't Take Our Word For It

In Industry Illusions, Retail on January 3, 2013

Quantifying the Levers of Retirement Success: An Empirical Study