The Federal Reserve Bank of San Francisco published a fascinating piece of research on Monday relating U.S. stock market performance to demographic trends. The results are not encouraging for long-term ‘Buy and Hold’ type investors.

Source: Stockcharts.com
Sadly, the U.S. Census Bureau is forecasting exactly the opposite dynamic to play out over the next 15 years as boomers retire. As this demographic scenario unfolds, the Federal Reserve Bank’s model suggests that stock prices will enter a persistent decline until 2021. Further, stocks are not expected to exceed their 2010 levels until 2027, after adjusting for inflation.
Key findings:

Source: Shiller (2011), DShort.com (2011), Chris Turner (2011), World Exchange Forum (2011), Federal Reserve (2011), Butler|Philbrick & Associates (2011)
While this outcome may appear inconceivable to many, I would urge you to examine the path of Japanese stocks from their peak in 1989 at almost 40,000 to their current price under 10,000. Japan suffered from too much debt and an unhealthy property sector, but these headwinds were amplified by another challenge which we in the West share (though not quite as badly): a declining share of working persons relative to retired persons.

Source: Stockcharts.com
Perhaps not surprisingly, U.S. stock markets have been tracking the performance of Japanese stocks since U.S. stocks peaked in 2000. When we overlay the two stock market indices and align their respective peaks, the resemblance is uncanny (and not a little bit shocking for ‘Buy and Hold’ investors). If we continue to track the Japanese experience, we may be setting up for another major drop, perhaps to new lows. 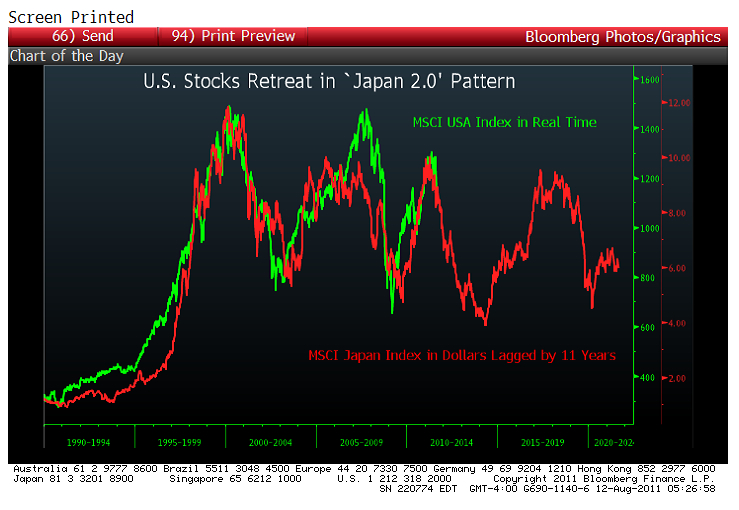 Source: Bloomberg, Ritholtz.com
You probably aren’t hearing this message from pundits on TV or in the papers, or economists at the major banks or investment firms. However, I urge you to keep three thoughts in mind when you hear these experts speak:
1. If a person’s job depends on them not knowing something, then they won’t know it.
2. Investment firms make much higher margins from clients who hold or trade stocks or stock mutual funds than from clients who hold bonds or cash instruments like GICs or money market funds. As such, they have a strong incentive to keep clients invested in stocks and stock mutual funds at all times, per the ‘Buy and Hold’ approach.
So what is a person to do when long-term Canadian bonds are yielding 0.64% after inflation, and developed market stocks are likely to yield no returns (but probably typically high volatility) for the next 15 years or more?
At Butler|Philbrick & Associates, we have a plan. At its core, our approach embraces two major areas of differentiation:

As a proof of the effectiveness of our approach in difficult markets, we published a study on how to profitably trade the Japanese bear market back in February (see here for full study). We have suspected for some time that the Japanese template was the most likely trajectory for developed stock markets over the next several years.

In the study, we applied our trend following approach to the Japanese stock market to see how it would have performed over its 21 year downhill roller coaster ride. 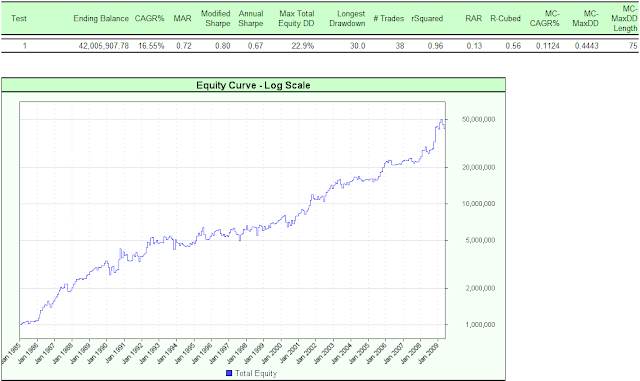 Source: Butler|Philbrick & Associates
You can see in the chart that by taking advantage of both positive and negative trends using a simple timing system over this period, our technique delivered over 16% annualized investment performance, while never dropping more than 22.9% from any peak to trough (see “CAGR%” and “Max Total Equity DD” respectively in the table above the chart).
Pretty good results generally, but especially when they’re compared with the 75% cumulative loss that most Japanese investors experienced by holding stocks over the past 20 years.
We are following a proven trend following model like the one above to deliver prospective returns for clients no matter what happens in markets. What are you (or your Advisor) doing to prepare for this potential investment outcome?
Categories:Industry Illusions, Market Commentary, Retail, Retirement
Tags:baby boomers, buy and hold, demographics, japan, m/o ratio
0 Likes