The Cult of Social Conformity

The Cult of Social Conformity

As a psychology graduate and a student of behavioural economics, I know from the literature that fear is a more powerful force than greed. In fact, fear of loss is about 2.5 times more powerful than lust for gains across a broad spectrum of studies. I take a fair amount of time with clients to try to get a good sense of a person’s true tolerance for loss. This leads to discussions about what people are most afraid of; what keeps them awake at night. Very often, people tell me that they are most afraid of not having ‘enough’. The definition of ‘enough’ consumes most of the rest of our conversations.

How Much is Enough?

Clients often define ‘enough’ in terms of how often they can travel, how much they can give to grandchildren or children, whether they can keep their golf club membership, or whether they can buy a vacation home or boat. People generally want to know that their lifestyle won’t change that much when they retire, and that they will have enough money to fill their free time with ‘adventure’ of whatever sort. Sometimes that means trekking through the Andes or African safaris, and other times people find adventure in their gardens, or in pursuing cerebral passions.

While everyone’s definition of ‘enough’ is different, one criteria is common to hundreds of conversations with clients from many walks of life, though clients very rarely express it directly. People are terribly afraid of failing to keep up with their friends and peers. Further, clients are quite aware of, and sensitive to, their relative standing.

Absolute versus Relative Success and Failure

For example, I recently spoke with a client who had been investing for many years with an investment company that is majority owned by his professional association. Each year during his annual portfolio review, the salaried Advisor from this company would nod reassuringly and tell him that he was ‘on track’. For evidence, the Advisor would state that the client’s financial condition was on par with the financial condition of higher paid specialists in his field of a similar age.

This is interesting from two perspectives. First, it may be that the average specialist in this professional field is in poor financial condition. Second, why should a comparison with the average financial position of his peers be of some comfort? 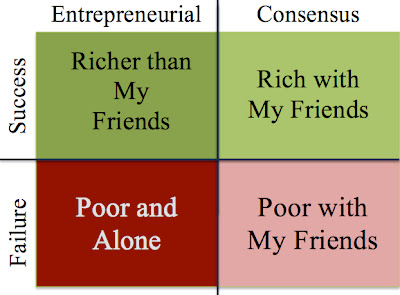 While clients are anxious about not achieving absolute financial success, they are far more comfortable with the notion so long as all of their friends follow the same process, and end up in the same boat. If all of their peers invest the same way and experience a poor result, they can all commiserate together, and this becomes tolerable.
However, people are very wary of adopting an approach that is different from their peers, because they run a far more terrifying risk: that they will fail while their friends are successful. This outcome is truly intolerable.
Informational Social Influence
For this reason, most investors are heavily influenced by a psychological dynamic called ‘informational social influence’. Wikipedia describes this phenomenon as:
“a type of conformity. When a person is in a situation where s/he is unsure of the correct way to behave, s/he will often look to others for cues concerning the correct behavior. When “we conform because we believe that other’s interpretation of an ambiguous situation is more accurate than ours and will help us choose an appropriate course of action,” it is informational social influence.”
This effect is especially strong where educated people have lost faith in the traditional ‘experts’ within a specialized domain. Many professional organizations, for example, have created wealth management arms to allow their members to act upon the informational social influence present within their association. These wealth management arms are often positioned as independent from the influence of untrustworthy outside ‘expert’ sources, so that the best interests of their members are uncorrupted. Of course, this provides fertile soil for the cultivation of wrongheaded dogma and even stronger forms of informational social influence.
A critical outcome from informational social influence is that it “often leads not just to public compliance (conforming to the behavior of others publicly without necessarily believing it is correct) but private acceptance (conforming out of a genuine belief that others are correct)” (Wikipedia) That is, people who are under a strong form of informational social influence are likely to truly believe in the consensus of their peer group, and are strongly resistant to alternative views. Interestingly, these are the exact qualities used to describe a cult. Source: Indexed
It is my humble opinion that this phenomenon drives the majority of decisions in markets. It drives investors slowly into new trends and market fads, which provides the steady flow of capital into these trends which causes them to move well beyond what might be justified by fundamentals. This results in the age-old patterns of bubbles and busts. It also drives the majority of investors, large and small, into the hands of traditional managers and consultants who apply the same techniques and generally deliver the same mediocre results. In this way, investors can not be held accountable for poor results, as they are just conforming to the established norm. Further, individuals can take comfort that, if they experience poor results, they won’t be suffering alone.
Definition of Insanity
It is a common refrain that the definition of insanity is repeating the same actions over and over while expecting a different result. Given what we now know about the cultish tendencies of groups whose members are guided in their actions by the actions of others in their peer group, I would like to offer some contrarian advice:
Do not rely on the opinions or actions of your peers, as they are probably being informed and influenced by their peers, of which you are one. Further, do not confidently rely on opinions expressed by the emissaries of any organization that relies on the confidence of your peer group to justify its existence. Further, it may prove dangerous to benchmark your financial health against the financial state of your peers.
Instead, and if something is important to your future, do your own research and come to your own conclusions. You may discover that trying something new and different from your peers could substantially improve your lot.
Open your mind; there is a better way.
Categories:Behavioural Finance, Retail
Tags:herding, social influence
0 Likes