In Behavioural Finance, Industry Illusions, Retail, Systematic Investing on January 27, 2011
“A sound banker, alas, is not one who foresees danger and avoids it, but one who, when he is ruined, is ruined in a conventional and orthodox way along with his fellows, so that no one can really blame him.” – Sir Maynard Keynes
Magical Momentum
The venerable Jeremy Grantham, one of the world’s greatest and most experienced value investors, devoted considerable space in his most recent quarterly missive to the perennial thorn in the side of traditional value investors: price momentum.
A market or stock exhibits price momentum if, over a period of 6 to 12 months, it demonstrates strong price performance relative to its peers. More importantly, it has been clearly proven across all time periods, markets, and geographies, that strong historical price momentum is a superb predictor of future price momentum, at least over a 3 to 6 month horizon. That is, markets and stocks that have performed most strongly over the prior 6 to 12 month period are more likely, on average, to also perform most strongly over the next 3 to six months. 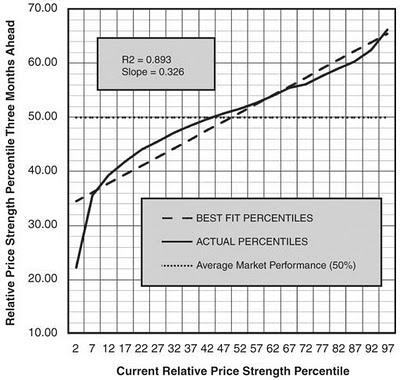 This flies in the face of both intuition and the dominant theory about how markets work. Intuition and common sense support the ubiquitous mantra of, ‘Buy low, sell high’. Modern Portfolio Theory asserts that markets are efficient, and trends can not persist. Why would a rational investor chase an expensive market?
It turns out that, as happens so often in investing, the common sense approach is dead wrong. In fact, stocks, sectors and markets that have dropped the most over the prior 6 to 12 months will perform poorly on average, despite potentially being ‘cheap’ by traditional measures. Cheap stocks tend to get cheaper. On the other hand, buying stocks near current highs, and which have gone up the most over the prior 6 to 12 months, has been an extraordinarily successful strategy over time.
As an illustration of this effect, please examine Chart 2, which shows the relative performance of U.S. stocks from 1927 through 2008 ranked according to their prior 12-month price momentum. For example, the red line shows the performance of the top 10% of stocks, as ranked by their 12-month prior price performance, and re-selected quarterly, while the dark blue line at the bottom shows the performance of the bottom 10% of stocks. The red line shows how you would have done if you had stuffed your portfolio at the end of every quarter with the stocks that were up the most over the prior 12 months. Vice versa with the blue line. You can see that strong stocks outperformed weak stocks by 10,000 times over this time period. 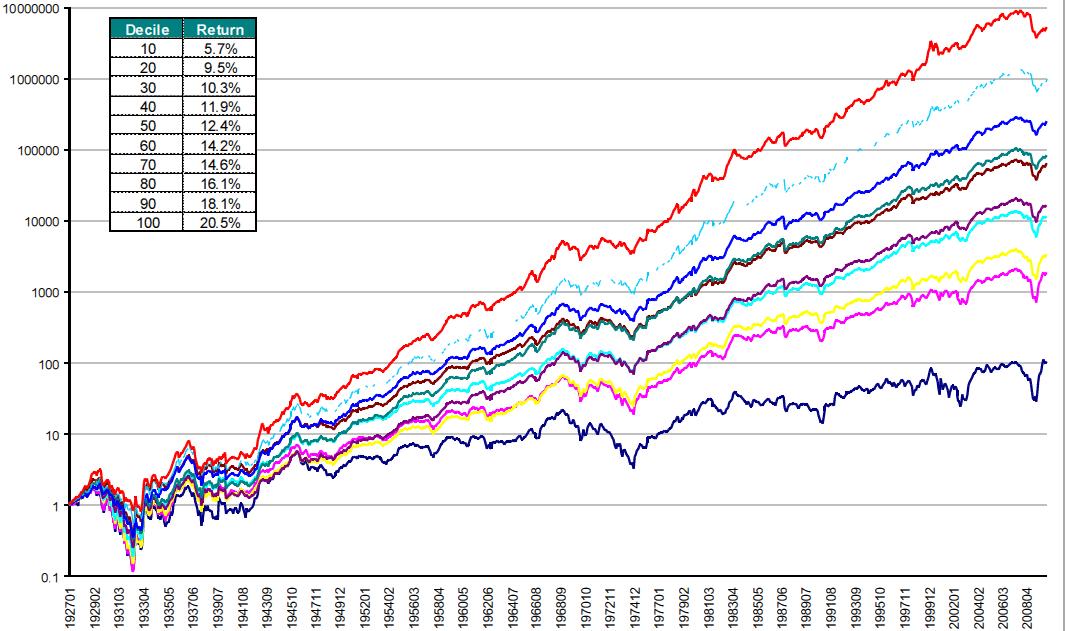 Source:  Ken French Data Library
Chart 3 below demonstrates how constructing a portfolio by holding the top performing stock market sector (i.e. energy, technology, financial services, etc.) over the prior 12 months would have been a very effective strategy over the long term. In this case the green line tracks the performance of a portfolio which buys the top performing stock market sector over the prior year. The blue line holds the top two best performing sectors, while the red line reflects a basket of the top 3. The blue line at the bottom shows the performance of a simple “Buy and Hold” strategy. Note that holding the top single sector provided performance 6 percentage points per year higher than “Buy and Hold” over this very long period. 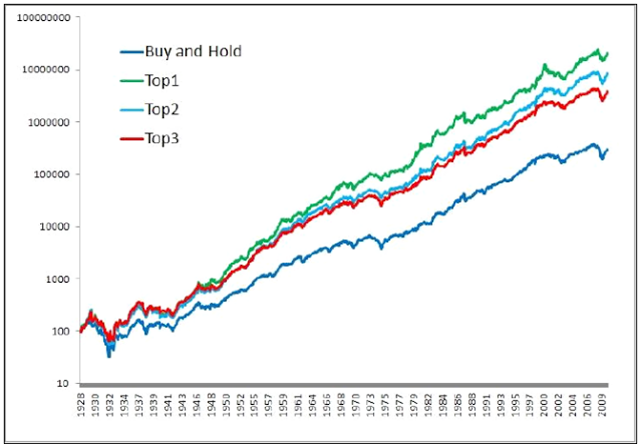 Source: Mebane Faber (2010)
Professional Lemmings
Jeremy Grantham offers us a typically shrewd theory for why momentum effects are so prevalent in markets. His theory rests on the sound premise that career risk drives the vast majority of investment decisions. In his words, everyone who works in the markets, “behaves as if his job description is ‘keep it’.” Referring to Sir Maynard Keynes’ economic texts, Grantham adds,  “Keynes explains perfectly how to keep your job: never, ever be wrong on your own.” [emphasis mine]
In other words, Advisors and managers know that, even if they lose substantial capital for clients, they are unlikely to lose clients, or be fired from their jobs, so long as everyone else is losing big money too. The rational approach for Advisors and managers from this perspective is to look around and see what the other guy is doing, and beat him to the draw.Grantham again: “And if everyone is looking at everybody else to see what’s going on to minimize their career risk, then we are going to have herding. We are all going to surge in one direction, and then we are all going to surge in the other direction. We are going to generate substantial momentum, which is measurable in every financial asset class, and has been so forever. It’s the single largest inefficiency in the market. There are plenty of inefficiencies, probably hundreds. But the overwhelmingly biggest one is momentum“. [emphasis mine]
Mutual fund managers are a great case in point. Would you be surprised to learn that, if a mutual fund manager is charged with a Canadian equity mandate, and Canadian stocks drop by 50% in a year while the manager’s fund drops by 45%, the manager receives her full bonus? She earns her full compensation despite the fact that she lost 45% of her clients’ capital in that year. This is because she has very narrowly and explicitly been charged with keeping up with the performance of the Canadian stock market. The manager’s greatest risk is in deviating from the performance of Canadian stocks; she is much less concerned with losing money.
Given the risks she faces, would you expect this manager to be more concerned with maximizing her funds’ risk-adjusted performance, or will she be more concerned with what her peers are doing so she isn’t left behind?Keynes also discussed in great detail the convention of ‘extrapolation’, which is the tendency for people to base predictions on what has happened in the past. All of us embrace extrapolation in order to make sense of a very uncertain world, even though we know from experience that predictions of any kind are unstable, especially out further than a few months. Analysts are famous for extrapolating because, by definition, if you make a prediction of any kind, you are susceptible to career risk. This can be observed in how economists and analysts provide estimates that cluster together, like a school of fish trying to confuse a shark. Even when very substantial fundamental changes are afoot, analysts will only change their estimates of the future in small increments over time, as they wait for confirmation from their peers. For this reason, the investment community is very slow to adapt to change, which allows for trends to form and amplify over time.
Let He Who Is Without Sin Cast the First Stone
As you can imagine, all investors, not just professionals, help to create momentum. Individual investors are also extremely sensitive to another important emotional factor: envy thy neighbor. Don’t feel bad, though; even some of the greatest minds of the last millennium were equally susceptible. Take Sir Isaac Newton, for example, who invested quite early in the ‘South Sea Bubble’ in Britain in the early 1700s. The following chart shows the trajectory of the bubble, and Newton’s decisions along the way. 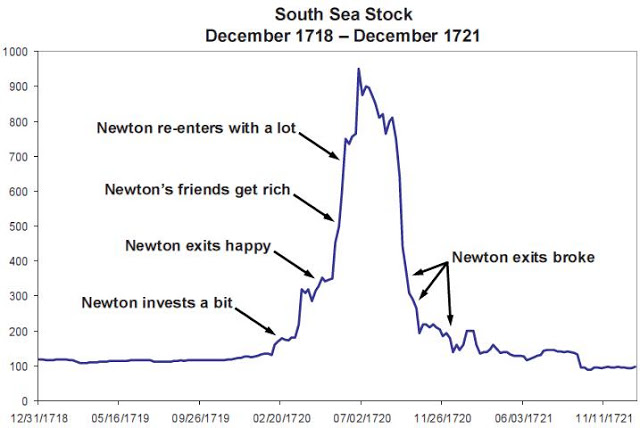 Source: Marc Faber
Note that Newton did quite well in recognizing the opportunity early on, and exited quite happily less than 6 months later with a tidy profit. One might surmise that he felt prices of ships were fairly valued at that point, and having substantially improved his economic lot, felt satisfied – at least for a while. For as prices continued to rise, past $300 where Newton sold, past $500 where all of his friends were becoming rich beyond their wildest dreams, he eventually couldn’t take the social pressure of watching his friends get rich while he stood on the sidelines. So he did what many investors do: he entered the market with his total personal fortune (how else to catch up to his friends?), and was eventually wiped out as the bubble collapsed.
Nortel anyone?
Conclusion
I couldn’t possibly wrap up this essay more eloquently, or with more credibility, than did Mr. Grantham himself.
“Let me end by emphasizing that responding to the ebbs and flows of major cycles and saving your big bets for the outlying extremes is, in my opinion, easily the best way for a large pool of money to add value and reduce risk. In comparison, waiting on the railroad tracks as the “Bubble Express” comes barreling toward you is a very painful way to show your disdain for macro concepts and a blind devotion to your central skill of stock picking. The really major bubbles will wash away big slices of even the best [value] portfolios. Ignoring them is not a good idea.”
A strategy of following the market’s strongest trends – that is acknowledging the tendency for investors and managers to herd, extrapolate and focus on career risks – has demonstrated consistently strong risk-adjusted performance over time. Mr Grantham’s explanation of this phenomenon helps to cement our long-term focus on these factors to deliver superior risk-adjusted investment performance.
Categories:Behavioural Finance, Industry Illusions, Retail, Systematic Investing
Tags:faber, Grantham, Keynes, Kirkpatrick, modern portfolio theory, momentum, MPT
0 Likes

Retirement at the Casino