In Industry Illusions, Market Commentary, Retail on September 27, 2010
US Federal Reserve ex-Chairman Paul Volcker, whose policies under President Carter in the later 1970s and early 1980s single-handedly stuffed the inflation genie back into its bottle, and laid the foundation for the world’s longest period of uninterrupted growth, set aside his prepared remarks at a Federal Reserve of Chicago event yesterday and instead delivered a “blistering, off-the-cuff critique leveled at nearly every corner of the the US financial system“, according to the Wall Street Journal. In addition to rants about “relentless corporate lobbying by banks and politicians to soften the rules” and candid remarks about how the “financial system is … absolutely broken“, Volcker had this to say about financial markets:

“Normal distribution curves – if I would submit to you – do not exist in financial markets. It’s not that they are fat tails – they do not exist. I keep hearing about fat tails, and Jesus, it’s only supposed to occur every 100 years, and it appears every 10 years!”

This statement is a startlingly frank denouncement of the very foundation of contemporary investment theory. The primary assumption of Modern Portfolio Theory, and its corollaries, the Efficient Markets Hypothesis, and the Black-Scholes Merton model, is that financial market returns conform to a normal distribution. If we acknowledge the possibility that financial market returns do not conform to a normal distribution, we must by extension reject the validity of MPT.
Readers might be familiar with this chart, which plots the distribution of actual monthly stock market returns from 1870 through 2009. Note the spikes on the curve far out to the left and right. If you look closely (or click to bring up a larger version of the chart), you can see the statistical likelihood of these monthly returns occurring if we assume returns ARE normally distributed. Note the month at the far left which, under MPT assumptions, would be expected to occur just once since the big bang – how unlucky for us that it happened to occur in our lifetime. 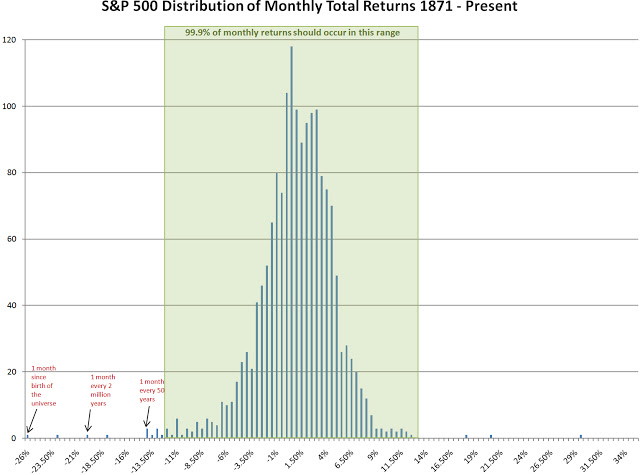 Source: Shiller (2009), Butler|Philbrick & AssociatesOf course, this is not news to clients of Butler|Philbrick & Associates and readers of this blog. We have posted often about the fallacy of MPT and the normal distribution, and how this fallacy affects investors (see here, here, here, here, here…). However, Mr. Volcker’s statement should inspire substantial anxiety among the ‘Thundering Herd’ of Advisors and Consultants to the world’s wealthy, who allocate billions of dollars of pension and wealthy investor capital to funds, managers and strategies which depend entirely on the veracity of MPT.

If you have observed a gap between the actual growth experienced by your portfolio, and the growth you expected to see in your portfolio, we may have discovered the culprit. Here’s a ‘back-of-the-napkin’ theory:

Hard Questions for Your Investment Advisor