Readers will undoubtedly be familiar with Robert Louis Stevenson’s famous tale, The Strange Case of Dr Jekyll and Mr Hyde. The story centers around a well respected (though hardly innocent) physician, Dr. Henry Jekyll, who produces a potion which causes him to transform into a cruel, sadistic, evil Mr. Edward Hyde. Wikipedia asserts that the story is, in fact, “an examination of the duality of human nature (that good and evil exists in all), and that the failure to accept this tension (to accept the evil or shadow side) results in the evil being projected onto others.” This article takes the position that markets have a duality of nature that mirrors the personalities of Jekyll and Hyde, and that traditional investment techniques ignore the existence of Hyde, thus inflicting pain and suffering on unsuspecting investors.

It is a foundational principle of modern investment theory that market volatility is utterly random, with major swings up or down interspersed with minor moves with no discernible pattern. This principle is put to use in the construction of trillions of dollars of investment portfolios, and is an argument commonly put forth by large investment firms in marketing and sales material to justify their buy and hold approach. If volatility can not be predicted, they claim, then why try to avoid it?

To supplement this argument, firms and Advisors often show statistics or charts which allegedly demonstrate how missing the best days or months in the market will result in dramatically lower returns. They go on to conclude that these best months are impossible to predict in advance, so investors must be fully invested all the time in order to experience these great returns. However, a simple review of the evidence should cast doubt on the validity of this assertion.

It So Bad to Miss the Best Months In the Market? 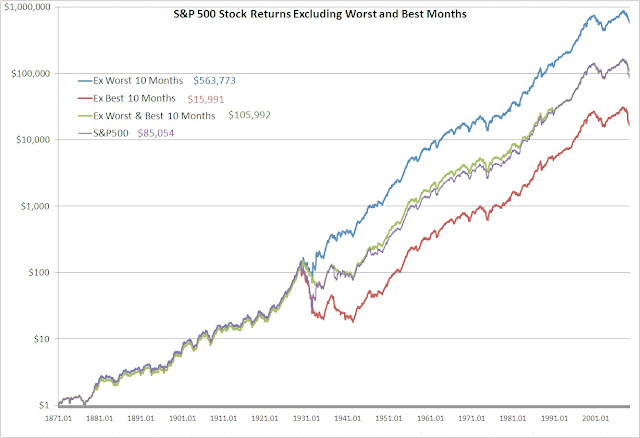 Unfortunately, this assertion does not stand up to the evidence. To whit, the blue line in the chart shows the returns to an investor who managed to avoid the 10 worst months in the markets. This investor earned $563,000 in comparison to the buy and hold investor’s $85,000. Perhaps we should be seeking to avoid losses, rather than seeking to maximize our exposure to strong returns…

The most important line on the chart, however, is the green line, which shows the returns to an investor who managed to avoid both the 10 best, and the 10 worst months of the past 140 years. You will notice that the green line tracks the purple line (buy and hold) very closely over the entire period. Amazingly, an investor who is able to avoid the 20 most extreme months, both positive and negative, experiences virtually the same growth as a “buy and hold” investor.

Boil and Bubble, Toil and Trouble

It turns out that markets do not transition smoothly and randomly from periods of low volatility to periods of high volatility. The evidence shows that, in stark contrast to MPT assumptions, markets are either very calm, or utterly terrified; further, there is no middle ground.

There is a term for this type of dynamic, where a system is either in one state or another, that is derived from the physical sciences: phase transition. A simple example of this is when water turns to ice or steam. During this phase transition there is no middle ground; water is either a solid (ice), liquid (water), or gas (steam). In the same way, markets are either calm or terrified.

If markets behaved as Modern Portfolio Theory asserts, then market returns should be distributed according to a standard  bell curve. The charts below show the actual distribution of market returns against the theoretical bell curve expectations of MPT (Chart 2), and the differential between them (Chart 3.). The dotted line in Chart 2. is the standard bell curve; notice that the actual return distribution is much taller in the middle (lots of small returns), and has lots of spikes way out on the sides. 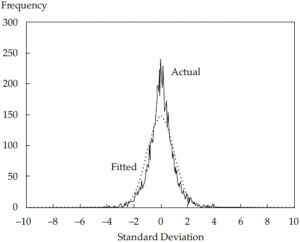 Chart 3. simply subtracts the actual frequency of returns from the expected frequency of returns (subtracts the solid line from the dashed line in the chart above), to show the difference between the two curves. Notice how the market delivers far more small daily returns than the model predicts. This makes sense given the tall spike in the middle of Chart 2. Also notice that the market delivers far more extreme returns than expected by the model, which are reflected in the spikes far out on either side of Chart 2. Perhaps even more interestingly, the market delivers very few days with mid-sized returns. You can clearly see this on Chart 3. depicted as points below the zero line. 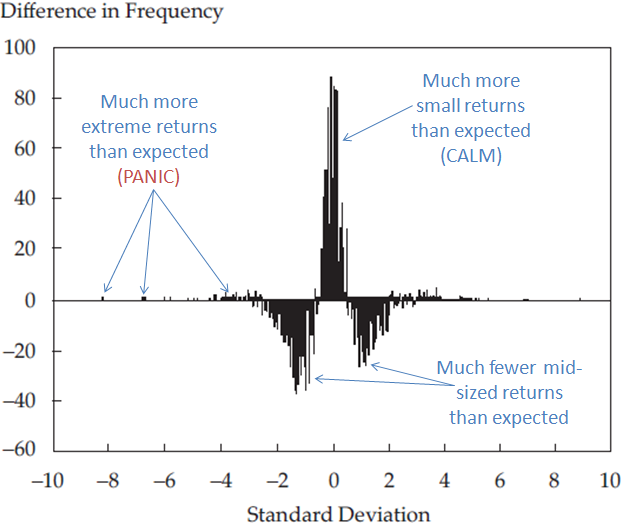 We can deduce from this frequency distribution that markets are almost always in one of two distinct states: calm or panic; kind or cruel; Jekyll or Hyde. Volatility is either very high, or very low, with few periods in between. So where would we find the 10 best and 10 worst return periods on the charts above? That is, where would we find volatility clusters? Clearly they would occur during cruel and crazy Mr. Hyde markets, not during kind, calm Dr. Jekyll markets. So is there a way to identify when markets are likely to reflect Dr. Jekyll (risk is low), and when they are likely to transform into Mr. Hyde (risk is high)? 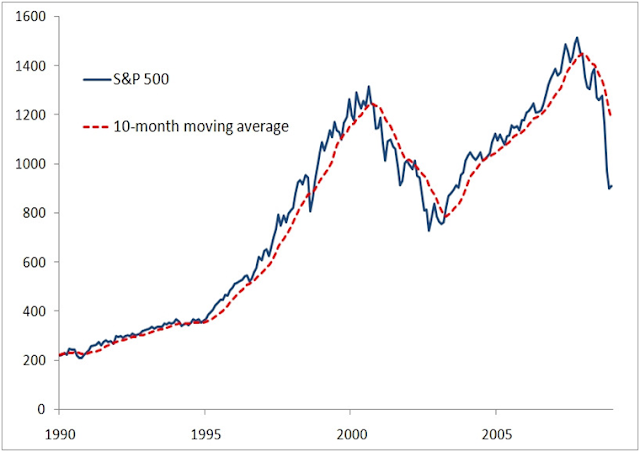 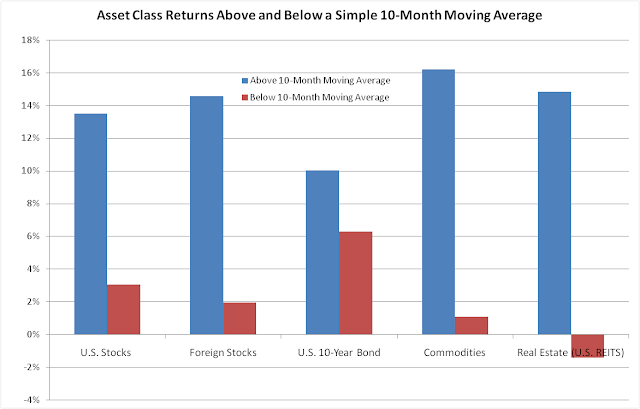 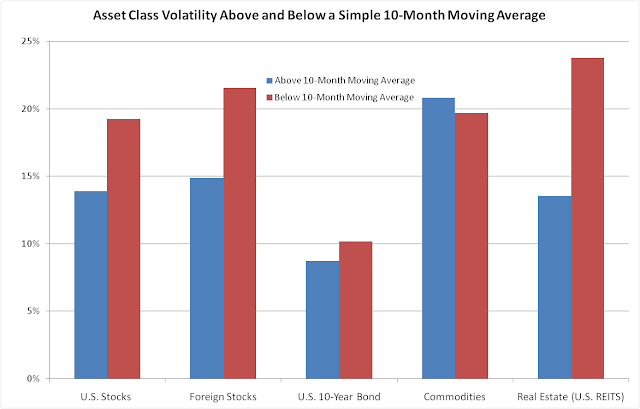 It should be obvious from the charts that returns (blue bars) are much higher when markets are trading above their 10-month moving averages, while volatility is substantially lower. In fact, on average over the 5 markets tested, calm markets trading above their 10-month moving averages delivered returns over 6 times higher (13.83% vs. 2.19%) than panicky markets, and at just 75% of the volatility (14.35% vs. 18.86%). Further, the average volatility is skewed higher by commodities, which tend to move higher under panicky conditions (wars, blockades, earthquakes, etc.), in contrast with the other asset classes which tend to drop.

I Know It When I See It

“I shall not today attempt further to define the kinds of material I understand to be embraced within that shorthand description [pornography]; and perhaps I could never succeed in intelligibly doing so. But I know it when I see it, and the motion picture involved in this case is not that.“

It is instructive to discuss the bipolar nature of markets in the aggregate by contrasting the natures of the two characters (Jekyll and Hyde) via a discussion of average returns and volatility. But it is, perhaps, equally instructive to demonstrate how these different personalities manifest in the market. To that end, the charts below show the S&P 500 stock index during periods where the market is calm and Jekyll-like, and during periods when it is cruel and Hyde-like. The two personalities are unmistakable, even to the untrained eye!

It helps to look at charts of actual market behaviour to get a sense for what Jekyll and Hyde markets look like in real time. Note that last chart; it sure has been nice to be in cash during Hyde’s recent appearance!

Investment markets have a dark side that is not generally acknowledged by the firms, advisors and consultants who manage portfolios according to the precepts of Modern Portfolio Theory (MPT). In contrast, investment firms and many advisors loudly and confidently assert that investors should own stocks in a fixed allocation through any and all types of markets. In marketing literature, these advisors point to MPT’s assertions that market risk is unpredictable and randomly distributed as evidence that investors shouldn’t try to time the market.

In examining actual market data, it is clear that markets have two independent personalities, and that investors would be well served to avoid markets when they are panicky and cruel. We see that market volatility ‘clusters’ around periods of market panic, rather than being randomly distributed, and that these periods of panic can often be confidently identified by using a simple monthly moving average. Investors who take the extra step of identifying the general personality of the markets will likely be rewarded with higher returns and less emotional distress.

A Tale of Two Markets