The Fallacy of Cash on the Sidelines

The Fallacy of Cash on the Sidelines
Merrill Lynch posted the results of its most recent Survey of Fund Managers for August this morning. The survey covered 204 fund managers in 80 countries who control $554 billion in assets, and the data dispels the myth of excess cash on the sidelines.Barry Ritholtz at ritholtz.com summarized the findings. Note that U.S. markets peaked in September 2007:

• Tech (28%) is the most favored sector everywhere.

Barry concluded, ‘While I keep hearing about cash on the sidelines, the professionals seem to be “All In.”‘

As an addendum to the Merrill Lynch survey (full release pasted below), please see the attached chart of US commercial paper and Money Market assets. The chart was originally posted by WallStreetExaminer.com using US Federal Reserve data. Annotations in red are my own. 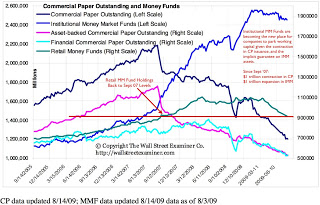 Conclusion: Investable Money Market fund assets are no higher than at the peak of markets in September 2007. Retail holdings of MM funds have now retraced to the levels of Sept 2007. The spike in Institutional MM assets from Sept 2007 is exactly equivalent to the drop in CP assets over the same time period, offering compelling evidence that companies have simply moved treasury working capital out of CP and into IMM funds. This is NOT parked investment capital, and is unlikely to find its way into stocks.

Investors appear to be exactly as fully invested as they were in September 2007, at the peak of the bull market. This dovetails nicely with the Merrill survey.

That said, the Primary Dealers are swimming in reserves. Liquidity parked in Securities Open Market Accounts at Primary Dealers is also back at September 2007 levels (See PD Liquidity Chart). If the money-centre banks decided to leverage these reserves into the system, they could single-handedly push stocks, commodities and corporate bonds higher. It remains to be seen whether banks will hold these as reserves against ‘Level III’ assets on their balance sheets or put it to work speculating. 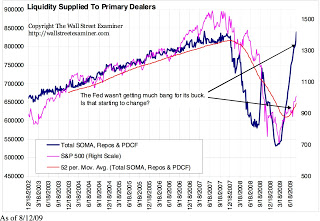 Questions over Imbalances in Early Stages of Recovery

NEW YORK and LONDON, Aug. 19 /PRNewswire/ — Investor optimism about the global economy has soared to its highest level in nearly six years, with portfolio managers putting their cash back into equity markets, according to the Merrill Lynch Survey of Fund Managers for August.

A net 75 percent of survey respondents believe the world economy will strengthen in the coming 12 months, the highest reading since November 2003 and up from 63 percent in July. Confidence about corporate health is at its highest since January 2004. A net 70 percent of the panel respondents expect global corporate profits to rise in the coming year, up from 51 percent last month.

August’s survey shows that investors are matching their sentiment with action, by putting cash to work. Average cash balances have fallen to 3.5 percent from 4.7 percent in July, their lowest level since July 2007. Equity allocations have risen sharply month-over-month with a net 34 percent of respondents overweight the asset class, up from a net 7 percent in July. Merrill Lynch’s Risk and Liquidity Indicator, a measure of risk appetite, has risen to 41, the highest in two years.

“Strong optimism in August represents a big turnaround from the apocalyptic bearishness of March. And yet with four out of five investors predicting below trend growth for the year ahead, a nagging lack of conviction about the durability of the recovery remains,” said Michael Hartnett, chief global equities strategist at Banc of America Securities-Merrill Lynch Research. “The equity rally has been narrowly led by China and tech stocks. We have yet to see investors fully embrace cyclical regions such as Japan or Europe, or Western bank stocks.”

Technology remains the number one sector, with 28 percent of the global panel overweight the industry. Industrials and Materials lag with global fund managers holding 11 percent and 12 percent overweight positions respectively.

Further behind are Banks. Global fund managers remain concerned about the sector, holding a 10 percent underweight position. In contrast, investors within emerging markets are positive about Banks with a net 17 percent of fund managers in the regional survey overweight bank stocks.

Some of these sectoral and regional imbalances are starting to erode, however. Global fund managers have scaled back their underweight positions in bank stocks from 20 percent in July. Industrials and Materials have recovered from underweight positions one month ago. Emerging markets are less popular than in July when 48 percent of the panel most wanted to overweight the region. And Europe is a lot less unpopular. In July, a net 30 percent of respondents wanted to underweight the eurozone. That figure has dropped to just 2 percent in August.

Improved outlook for Europe, but investors drag their feet

Within Europe, fund managers appear as excited about the outlook as their global colleagues. A net 66 percent of respondents to the regional survey expect the European economy to improve in the coming year, up from a net 34 percent in July.

The net percentage expecting earnings per share to rise nearly trebled, reaching 62 compared with a net 23 percent a month ago. Investors in the region took an overweight position in Basic Resources, a cyclical sector, and radically scaled back their overweight position in Pharmaceuticals, a defensive sector.

In contrast to global respondents, those in Europe have failed to inject new money. “European growth optimism has finally caught up with other regions, but fund managers have yet to fully act on this and cash levels have actually increased and overall sector conviction is near record lows,” said Patrik Schowitz, European equity strategist at Banc of America Securities-Merrill Lynch Research.

A total of 204 fund managers, managing a total of US$554 billion, participated in the global survey from 7 August to 12 August. A total of 177 managers, managing US$370 billion, participated in the regional surveys. The survey was conducted by Banc of America Securities – Merrill Lynch Research with the help of market research company TNS. Through its international network in more than 50 countries, TNS provides market information services in over 80 countries to national and multi-national organizations. It is ranked as the fourth-largest market information group in the world.

Sirens in the Distance