Macro Indicator Summary
I am impressed with markets’ resilience in the face of China’s 6.7% sell-off overnight. Aside from Hong-Kong, global equity markets have shrugged-off the new Chinese bear market with a disinterested grunt. Here in Canada, banks are mostly higher on the day despite a 1.5% drop in the index, while the U.S. banking sector continues to consolidate sideways, off just 0.75% today.

4:30pm update: Volume was lower across the board, so institutions are sitting on their hands.

Note: Please click on any and all charts for a larger image.
The clear losers from the China sell-off are commodities, with oil down $3 to below $70, and copper off 12 cents at 2.83. Oil is at critical support from a trend-line going back to late April (see chart of DBO below), while copper has reversed off important resistance at the 61.8% Fibonacci retracement level of $3.00 (See copper Fibs below).
DBO Oil Fund ETF

Source: Stockcharts.com
Commodity currencies, like the CAD and AUD sold off substantially earlier in the day but have since rebounded, especially against the Yen. The CAD/USD found support from its 50 day moving average slightly below 90 in the morning, and is likely to test its multi-week trend-line (currently at ~89) before finding further direction.
Canadian Dollar ETF

Souce: Stockcharts.com
We monitor the Asian Dollar Index for macroeconomic strength in that region. The index has been consolidating for several weeks in a pennant formation which is likely to break up or down in the next few days. Given the ADXY’s strength in the face of China’s panic sell-off overnight, an upside breakout is more likely. On an upward break-out, there is resistance at the previous high (~109) which, if broken, would signal further emerging market strength, led by Asia.
Asian Dollar Index

Source: Bloomberg
Bonds are confirming the bearish story in commodities, with long-term Treasuries rallying to resistance for the second time in 2 days.
20+ Year US Treasury Bond ETF 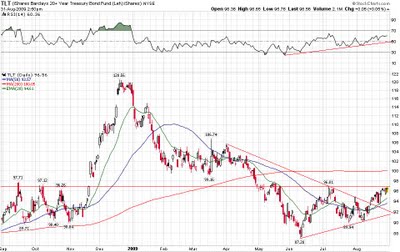 Source: Bloomberg
10-year yields have also been consolidating in a pennant formation; a break of 3.25% would indicate a major change in the trend of 10-year rates, at which point equity bulls would necessarily be put on the defensive.
10-Year US Bond Yield 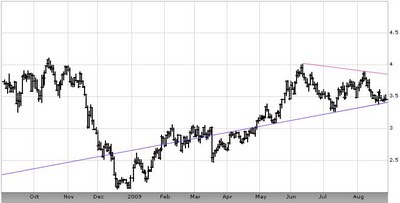 Source: Bloomberg
Gold continues to consolidate in its intermediate-term pennant structure forming the right shoulder of what looks like a huge inverse head and shoulders formation. This structure suggests higher prices lie ahead. However, there are two clear resistance levels that must be breached before we can celebrate gold’s new up-trend. Using the GLD ETF chart, the first resistance line sits at ~$94.25, with the longer-term line at ~$95.50. These are important levels to watch. A breach of the upper resistance line would suggest a re-test of the previous highs near $99, with potential for a test of it’s all-time high of $100.44.
GLD US Gold ETF

Source: Stockcharts
Meanwhile, credit spreads seem impervious to the macro fragility implied by the charts above. CDS spreads in Europe and the U.S. continue to consolidate near their intermediate-term lows.
US and European CDS Indices

Source: BMO CM Research
In conclusion, several important macro indicators are testing important resistance and support levels, but the pennant-shaped consolidation patterns suggest trend-continuation at this time. As such, stock markets are likely to move sideways in the short-term, with the potential for a short-term correction driven by commodity weakness. The most likely intermediate-term direction for stocks is up, with the potential for the S&P to move as high as 1200 before we begin wave 3 down. Should 980 be taken out on the S&P, we would look for a more immediate, steeper decline to ensue.
For longer-term context, I leave you with Doug Short’s most recent chart of the Three Mega Bear Markets.

Sirens in the Distance