Those tortured souls who have thus far clung faithfully to the rules of capitalism, finance and economics they learned in business school have surely been disillusioned by the markets’ most recent break to new highs. Like children who have finally relinquished the corporeal reality of Santa Claus, these poor souls may be searching for new rules and theories to legitimize their discipline. After all, we can’t all be technical analysts, can we? Someone has to take the first step, buy the first shares in order to break a stock to new highs and trigger the technical feeding frenzy!

Those looking for new meaning in the markets may have already discovered the refreshing empiricism of behavioral economics to fill the theoretical void left from the now incontrovertible refutation of the efficient markets hypothesis and CAPM. Surely everyone now realizes that the only factors that impact asset prices are liquidity and sentiment. The former is measurable, though definitions vary considerably. Volume, cash on the sidelines, monetary growth and velocity, reserves held at Primary Dealers and foreign capital flows all contribute to a predictive measurement of liquidity. Sentiment is more esoteric, but can still be measured using surveys and studies of actual trader commitments. Of course, sentiment is only really predictive of market direction when it reaches extreme levels; extreme levels of bullish sentiment often signal important market tops (who is left on to buy more stock?), while extreme bearishness often signals market bottoms (who is left to sell stocks?).

James Montier of Societe Generale is perhaps the most widely followed practitioner of behavioral finance (as opposed to researchers and theorists like Thaler, Kahneman, Tversky and Smith). A recent missive of his was particularly interesting, as it described the results of a remarkable experiment in behavioral finance that may have some bearing on the present market environment.

“As the US market is now back at fair value [950 at time of writing], I’ve been pondering what could drive the market higher. Jeremy Grantham provides some answers in his latest missive to clients. He argues that “the greatest monetary and fiscal stimulus by far in US history” coupled with a “super colossal dose of moral hazard” could generate a stock market rally “far in excess of anything justified by…economic fundamentals”. This viewpoint receives support from the latest finding from experimental economics. The evidence from this field shows that even amongst the normally well behaved ‘experienced’ subjects, a very large liquidity shock can reignite a bubble!”

Mr. Montier then goes on to describe the results of an important study involving experimental markets (in which participants trade an equity-like asset against one another in a simulation), which suggests that experience helps to prevent bubbles – but that it takes more than one experience to change behavior. Explains Montier, “The first time people play the game, they create a massive bubble (like the dot.com bubble). The second time people play the game, they create yet another bubble. However, this seems to be driven by overconfidence that this time they will get out before the top. The third time subjects encounter the game, they generally end up with prices close to fundamental value.” 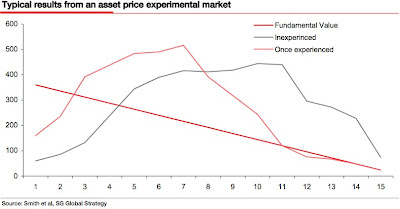 To reiterate, experimental results indicate that even subjects who have experienced the euphoria and losses from the creation and eventual implosion of one market bubble will almost always go on to create another bubble under similar conditions. When surveyed after the fact to explain why they made the same mistake a second time, subjects overwhelmingly indicated that they were confident they could get out ahead of the crash. When subjects realized after their second failed attempt that they were unlikely to outsmart the bubble, they finally refused to create a bubble on their third encounter with the game. 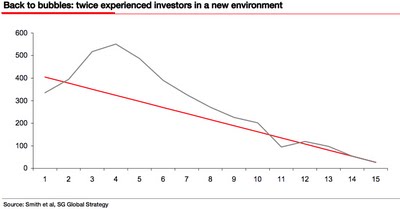 Of particular interest in today’s environment, the experimenters took the simulation one step further to discover whether, under the right conditions, they could cause the same experienced participants to create yet another bubble. It turns out that all it takes to re-ignite another bubble among experienced game participants is a massive liquidity injection. To wit, “new research by the godfather of experimental economics, Vernon Smith, shows that it is possible to reignite bubbles even amongst the normally staid and well behaved subjects who have played multiple bubble games. The key to this rekindling is massive liquidity creation. In fact, in his experiments Smith doubled the amount of liquidity available.”

Why is this relevant to today’s market situation? For starters, the Fed has essentially doubled the monetary base from $850 billion to $1.7 trillion in the past 12 months. Keep in mind that, given the leverage in the system ($~2 trillion in money supplied by the Fed supporting $56 trillion of credit), this has the potential to create a liquidity shock of epic proportions.

However, given the stagnation in the growth of monetary aggregates (M2 and MZM), banks are not currently leveraging these new reserves. In fact, of the $850 billion added to the monetary base by the Fed, $733 billion has been re-deposited at the Fed by the money-centre banks rather than serving as reserves against new credit creation, suggesting that banks are not yet ready to initiate a new credit cycle. I have attached to charts to this email from the St. Louis Fed for illustrative purposes. 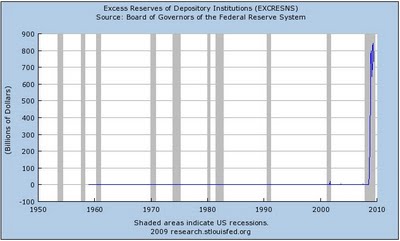 In conclusion, the Fed and other central banks (notably the Bank of China) have certainly done everything in their power to create the elements necessary to catalyze another asset bubble powered by a new wave of credit creation by the money-centre banks. It remains to be seen whether markets will fall for the same trick a third time. Should the Fed succeed, and new bubbles form, investors would be wise to heed the lesson learned by participants in the market simulation cited above, and beware the trap of overconfidence. Not every investor can be quick enough to avoid the inevitable burst – are your tools up to the task?

The Fallacy of Cash on the Sidelines