We knew that many of the banks have been taking advantage of the inscrutable fair value accounting rules by channelling reductions in the market values of their outstanding debt through income statements where they show up as earnings. If the value of outstanding liabilities declines while asset values are constant (under the revised fair value accounting rules introduced a few days ago), this can be recognized as an accounting gain.
This practice allows a bank to pad earnings on the basis that the risk implicit in its outstanding credit obligations has increased, likely due to the bank’s deteriorating financial position. (All things equal, as interest rate spreads on a bond increase, the price of the bond (or debt) decreases). The mind-bending implication is that, should the bank’s financial situation improve, spreads on its outstanding debt will narrow and the bank will have to book a loss.
Now we discover that, not only are the banks playing strange accounting games with the value of their outstanding liabilities, but many of the banks are actually booking profits from credit insurance written against their own debt! You just can’t make this stuff up!
Apparently the CDSs are subject to fair value accounting even though they will ultimately mature with no value unless the company defaults on its own debt.
Don’t worry if this didn’t make any sense on first pass. It is the accounting equivalent of an M. C. Escher drawing. 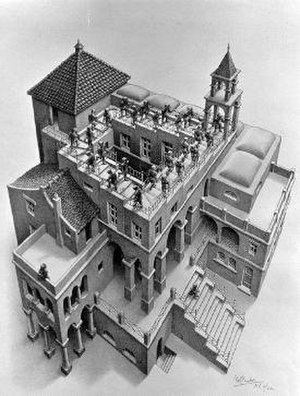 On Monday we wrote about Citi’s Q1 gains on credit value adjustments of its CDS.

We’re still not sure whether this is an actual CDS position against itself. Citi’s Q1statement has the following:

– A net $2.5 billion positive CVA on derivative positions, excluding monolines, mainly due to the widening of Citi’s CDS spreads

However, we do note this bit from Morgan Stanley’s recently released Q1 results.

In fact, Morgan Stanley would have been profitable this quarter if not for the dramatic improvement in our credit spreads – which is a significant positive development, but had a near-term negative impact on our revenues.

There’s a tiny bit more detail in the footnote of on the bank’s $1.69bn of Q1 net revenue in Insitutional Securities.

The banking credit catch-22 in action? We wrote this on Monday in relation to Citi.

If the market thinks Citi is doing well, the bank’s shares could rise, its CDS could tighten, its CVA gains could well reverse, hitting its earnings, and vice versa. If the market thinks it’s doing badly, Citi’s CVA gain will increase, but it could still possibly be in need of more capital.

Which today, turns into…

If the market thinks Morgan Stanley is doing well, the bank’s shares could rise, its CDS could tighten, its CVA gains could well reverse, hitting its earnings…

This is something of a problem for financials and should serve to highlight the ephemeral nature of certain bank profits in general.

Holding to Account blogger Luca Pacioli (H/T reader JN) for instance, also points us in the direction of 2008 CVA gains from banks including Barclays, RBS, HSBC and Bank of America, totalling at least $13bn. In his words:

Together with Citi, that means approximately $17.9bn will have to be charged back to bank P&Ls. Or put another way – in the last few months, the above banks have reported $17.9bn of profit they probably will never actually realise (this is on top of the general MTM issues on illiquid assets).

This entry was posted by Tracy Alloway on Wednesday, April 22nd, 2009 at 13:56 and is filed under Capital markets. Tagged with accounting, Banks, CDS, citi, morgan stanley.

The Looting of America's Coffers