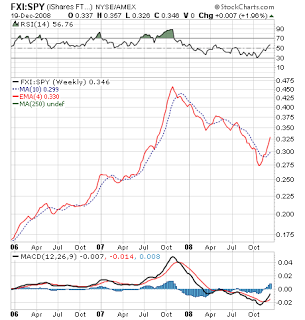 China is behaving in truly Keynesian fashion by cleaning up bad debts on bank balance sheets and demanding prudence and risk management during boom times while forcing banks to expand their balance sheets aggressively during more challenging times in order to move funds into the economy.
Though the author of the article below takes the view that China’s actions within the banking system are inappropriate, I would assert that it is exactly this mechanism for moving funds into the economy that European and North American economies are lacking.
It is also why China is likely to lead us out of this global slump. Chinese shares have been demonstrating consistent relative strength since mid-October. Shares in Shanghai and equivalent H-Shares in Hong Kong are making higher highs and higher lows, and they are holding above both short- and longer-term moving averages. 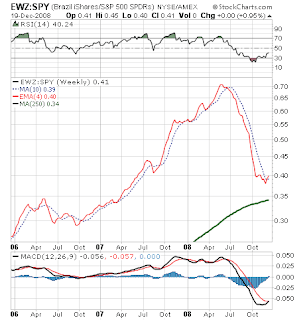 Singapore, Hong Kong and Taiwan appear poised to break out to the upside on the back of the strength in Chinese shares. Brazil and South Africa also look strong and, with both the reais and the rand looking to join the Euro in a surge against the dollar, you may receive a double whammy on the ETFs.
Please see the following story from Dow Jones News. ———————————————————————

In Institutional, Market Commentary on December 21, 2008