Corporate Bond Opportunities
Barrons interviewed Rob Arnott for this weekend’s edition.
From Wikipedia:
Robert D. Arnott (born 1954) is an American entrepreneur, investor, editor and writer who focuses on articles about quantitative investing. He edited the CFA Institute‘s Financial Analysts Journal, as well as three other books on equity and asset allocation management.[1]Arnott has also served as a Visiting Professor of Finance at the UCLA Anderson School of Management, on the editorial board of the Journal of Portfolio Management, the product advisory board of the Chicago Mercantile Exchange, and the Chicago Board Options Exchange.[1] He previously served as Chairman of First Quadrant, LP, as global equity strategist at Salomon (now Salomon Smith Barney), president of TSA Capital ManagementTSA/Analytic), and as vice president at the Boston Company. He graduated from the University of California at Santa Barbara in 1977.
Rob has been bearish for several years on both bonds and stocks, but he is starting to see some genuine value in risky assets. In particular, Rob expressed enthusiasm for locally priced emerging market bonds, emerging market stocks, and corporate bonds.
Some excerpts:
——————————————————————

… [T]his is the richest environment of low-hanging fruit I’ve seen in my career. And you would have to go back to 1973, 1974 or even, in some markets, to the Great Depression to find markets priced as attractively as now. This is not a time to be hunkering down in the safety and comfort of the Treasury curve. There are tremendous opportunities right now. It is so tempting in a bear market to focus on the glass being half-empty and on how much has been lost. But the glass being half full side is largely ignored.

What kind of an asset-allocation mix makes sense to you?

Where do you see opportunities?

A year from now, investors in convertible bonds are likely to be very pleased with what they [see] in terms of prices and yields. The same holds for emerging-market debt denominated in the local currency, which I prefer to dollar-denominated debt. You get a premium yield for emerging-market debt and an additional premium for investing in the local currency. Tacitly, that’s a dollar bet, but I don’t see how the dollar can do well on a long-term basis when we have indebtedness that is eight times our national income. Imagine an individual going to a bank and saying, “I owe eight times my income and I would like to borrow more.” The reaction would be immediate and drastic: “Give us your credit cards; we will slice them up.” But as a nation we still have our credit cards, and we are still using them aggressively.

You don’t sound like you are sold on stocks, Rob, even after this huge selloff.

The problem I have with stocks — and it is a very simple problem — is that while stocks are nicely priced, they aren’t attractively priced relative to their own bonds. The savagery of September, October and November was more drastic for bonds than it was for stocks. A 40% drop in stocks is big. A 20% to 30% drop in major categories of bonds is immense. So the take-no-prisoners market actually widened the opportunities on the bond side even more than on the stock side.

Investment-grade corporate bonds are a vivid example of that. The yield spreads over stocks is averaging about six [percentage points] right now. If you can get a 3.5% yield on stocks and 9.5% on the same company’s bonds, which is going to give you the higher return? The stocks will, if they show earnings and dividend growth faster than 6% — but historically that’s a stretch. So the bonds have been savaged worse than the stocks have, and actually represent the most interesting opportunity.

So you are talking about investment-grade bonds?

Yes, investment-grade bonds. But for bonds below investment grade, the spreads are quite extraordinary. By the end of November, spreads had widened out to nearly 20 percentage points above Treasuries and also above the corresponding stock yields. Suppose 40% of those bonds go bust next year. And suppose that you get 50 cents on the dollar back on the bonds that go bust. By that point, you have lost your spread of 20 percentage points.

But such a scenario has to happen every year, until the high-yield bonds mature, in order to merely match Treasury returns. A 40% default rate every year for several years would be truly without precedent. So I view 2009 as an “ABT” year — Anything but Treasuries. The less you hold in Treasuries, the better you are likely to do.

—————————————————————
Given Rob’s views on corporate and emerging market bonds, and his bearish call on Treasuries, I examined the performance of these markets relative to Treasuries of equivalent duration. I used the iShares fixed income ETFs as investable proxies for these bond market sectors as follows (data as of Friday close):
iShares Barclays 7-10 Yr Treasury Bond Fund (IEF: Effective Duration = 7.00)
iShares iBoxx $ Investment Grade Corporate Bond Fund (LQD: ED = 7.21)
iShares JPMorgan USD Emerging Markets Bond Fund (EMB: ED = 6.67)
iShares iBoxx $ High Yield Corporate Bond Fund (HYG: ED = 6.67)
By utilizing the 7-10 Yr Treasury Bond ETF one can effectively neutralize interest rate risk against the other funds, as the funds all have an effective duration at or near 7. This allows the analysis to focus exclusively on spreads to Treasuries.
Chart 1. Emerging Market Bonds vs Treasuries (Cash yield spread = 590 bps) 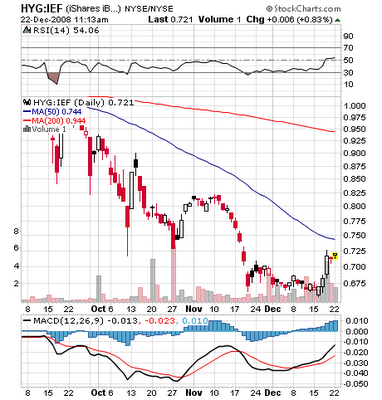 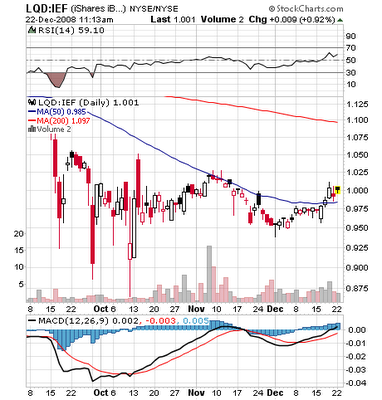 Source: Stockcharts.com
Bonds are effectively pricing in the Depression scenario; in order for Treasury yields to continue to decline, and spreads to continue to widen from these levels, the perception of default risk would have to increase beyond the levels of defaults and recoveries actually experienced in either the 30s, the 70s or the 80s by a substantial margin.
Although this is a risk, I view it as a small risk that is easily hedged against this trade by utilizing far out of the money put options on the S&P 500 and/or the emerging markets stock ETF (EEM). Even incorporating the premiums for the purchase of these options, the trade still represents a significant positive carry and a high reward to risk ratio.
Thus I envision a short Treasury ETF / long credit and emerging market bonds ETF trade to focus on the propensity of yield spreads over Treasuries to narrow over the coming weeks and months. This trade has effectively no interest rate risk as the durations of the ETFs in question all approximate 7.
Categories:Institutional, Market Commentary
Tags:bonds, emerging markets, treasuries
0 Likes